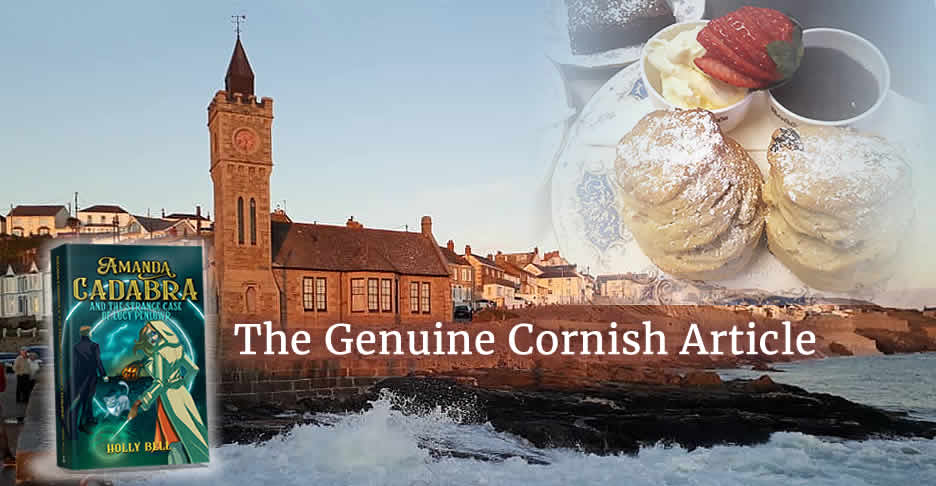 Cornish pasties, Jamaica Inn, smugglers, and Cornish clotted cream teas. What do they all have in common? Yes, they’re all things for which Cornwall is internationally famous, and they appear in the Amanda Cadabra series. However, it is the last item in the list that is probably the most popular and today we learn its secrets. 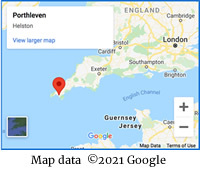 Michael and Susan Plant are the creative geniuses behind the café that inspired our heroine’s favourite port of call in Amanda Cadabra and The Strange Case of Lucy Penlowr: The Twisting Current, on the edge of mysterious Bodmin Moor. There Amanda finds her dream treat, astonishes Inspector Trelawney with her capacity for seconds, and can’t resist the opportunity to go back for more.

As readers will know, Amanda is dairy free on account of her asthma. Consequently, when writing the book, I set out on 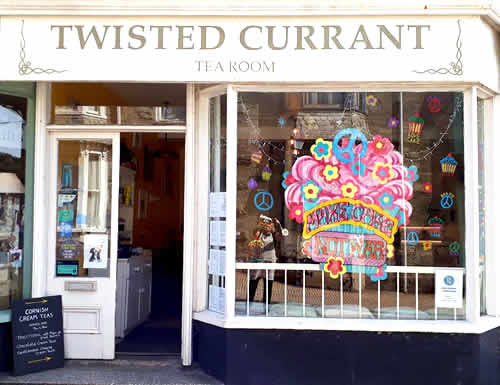 a hunt for a real life café that would serve a dairy-free, proper Cornish cream tea. Casting the net far and wide through Cornwall, I discovered a rare treasure: The Twisted Currant in Porthleven in the far south west, just half an hour from Land’s End, the most westerly point of mainland Cornwall and England. There they make and serve a luscious array of cakes and mouthwatering savouries with choices for dairy-free, gluten-free and vegan visitors.

Michael kindly granted me an opportunity to interview him about the story behind the café and its acclaimed cream teas. 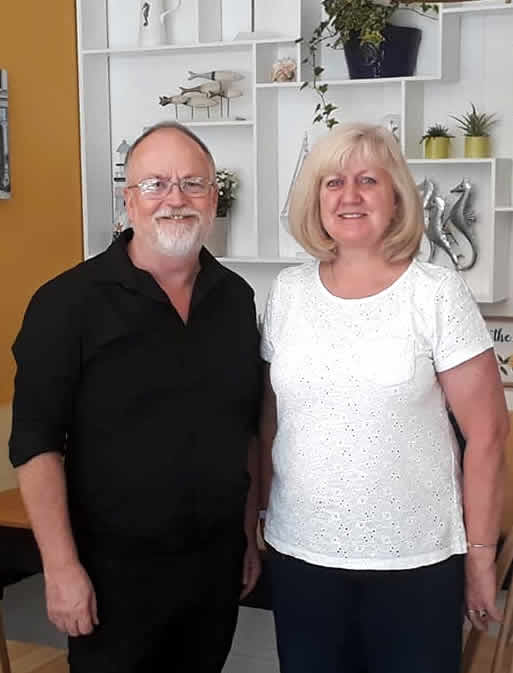 Please could you tell me, what is your and Susan’s connection to Cornwall?

We are not natural Cornish. Susan came down from London with her parents and I was posted to RNAS Culdrose whilst in the Navy. We have both been in Cornwall since 1982. I think the secret to living in Cornwall is to accept the Cornish ways and to go with the flow. I now consider crossing the river Tamar near Plymouth as almost going abroad.

What inspired you to open the café? Do you both come from a restaurant background?

We started a cafe as Susan baked professionally and I wanted to start a small business. We thought that our personalities matched a tea room environment.

The Twisted Currant was furbished only last year, with golden yellow, cream fresh white and warm 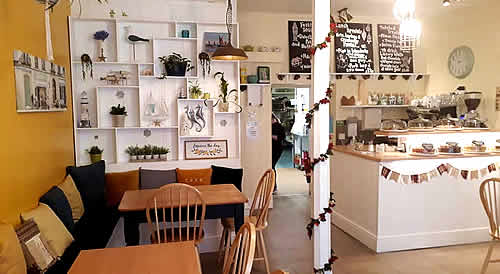 wood. It looks so appealing that I ad to ask: How did you decide how to present/decorate the café?

We wanted the tea room to be bright and fresh, but homely and a relaxed ambiance. One of our daughters designed the layout and I built the benches and counter.

Clearly Michael and Susan are a talented couple. For the benefit of international readers who may not be familiar with Amanda Cadabra’s favourite Cornish delicacy, I asked Michael,

Could you explain, please, for my international readers, what a cream tea is, what clotted cream is?

A cream tea consists of either fruit (sultanas) or plain scones with clotted cream, strawberry jam and a pot of tea. Scones are made with flour, butter and milk, made into a dough, rolled about an inch thick and cut with a round fluted cutter. They are baked until crisp on the outside.

There is some debate as to the order of the toppings, I gather.

In Cornwall the jam is applied to the scone and then the cream. In the neighbouring county of Devon the cream is applied first, then the jam. Local Cornish are passionate about the correct way to spread the jam and cream and gently chide anyone who gets it wrong.

Where did the inspiration come from to create a dairy-free cream tea?

scones. We do a lot of gluten free, nut free and vegan scones as well. Susan started making gluten free scones for one of our daughters friends who was celiac. We now try to have a dairy, gluten free or vegan version of everything on our menu so friends and family can all order something from our menu regardless of diet or lifestyle choices.

Susan is the inventor of all our cakes and scones. She invented the chocolate cream tea consisting of chocolate chip scones, chocolate spread and clotted cream. Reactions vary, with some customers stating they are to die for, and more traditional minded customers being scandalised with such decadancy.

What other Cornish specialties can we find at your café?

We try to do as much Cornish as possible and also serve saffron tea cakes and “Thunder and lightning” consisting of slices of white bread lathered with clotted cream and golden syrup.

Where do most of your non-local visitors to the café come from (in a normal year.)

Our customers range from locals to tourists from all over the UK and abroad. Many locals stay away during the busy tourist season but come out in winter when they know they can get a seat.

On Google Maps, I can see that Fore Street where the café is, is also named ‘Stret A-rag’. Do you use 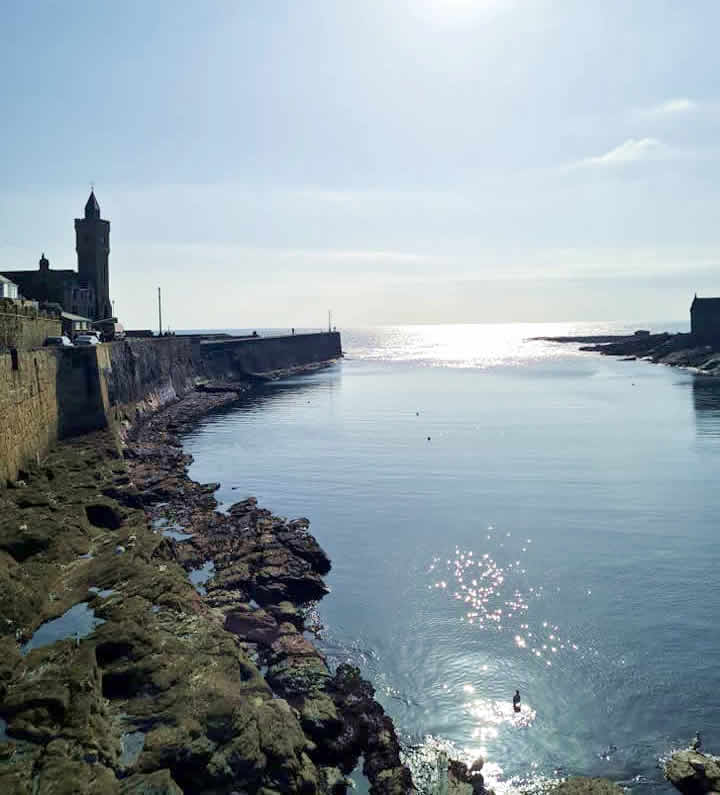 any Cornish words in the menu or around the café at all?

The Cornish language is not used in everyday speech any more but some vestiges survive. For instance, in the neighbouring village of Helston they have a dance every year around the town when “Hellys bys vycken” (Helston for ever) is shouted by the participants. The Cornish language is very similar to Breton in Brittany, France, where it is spoken more commonly.

Michael’s words made me feel especially happy to be part of the Cornish language revival, together with thousands around the UK and abroad who are now learning and speaking with one another on a regular basis. Hopefully one day it will again be used in everyday speech. Meanwhile, I asked Michael, the next question:

I read that Porthleven lies within the Cornwall Area of Outstanding Natural Beauty with breathtaking views from the Porthleven Cliffs and the mysterious Giant’s Rock. But what about Porthleven makes it special to both of you? 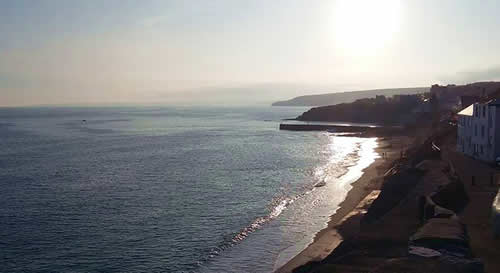 influx has a vibrant community spirit. They do things ‘dreckly’ (like the Spanish manana but slower) in Porthleven so stress levels are lower and life generally is more relaxed.

You’re right by the harbour with green hills and fields to the north. Looks like a Victorian building. Are you able to tell me anything about it?

The Twisted Currant shares a Victorian building with Star Gazey, a gift shop and holiday apartments above. It was originally a grocery store with owners accommodation above but has seen many different businesses over the years since.

Is this the first time The Twisted Currant has made an appearance in a novel?

As far as I know it is the first time the Twisted Currant has made an appearance in a novel.

I was excited to see the word ‘Rodda’s’ on two to the little dishes in two of the photos. It’s the only clotted cream I ever buy when I want a treat. I’m lucky enough to live near a supermarket that always has it and so I can feel that little connection will Cornwall.

We use Rodda’s clotted cream with our cream teas. It is a local business which is now world renowned and is always lip-smackingly good. Clotted cream is understood to have been invented many years ago when a farmers wife inadvertently left a pot of cream on the stove overnight. When she came down in the morning the cream had thickened and clotted cream has been made ever since.

Michael kindly said that he was ‘happy for you to mention the Twisted Currant in any of your books in the future.’ You 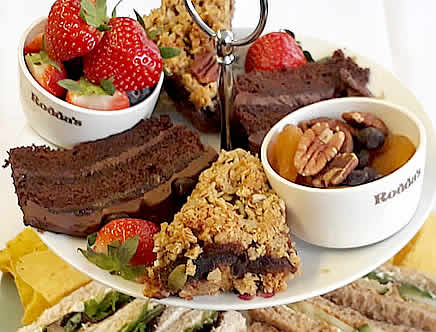 can be sure that Amanda will be making a return visit to the literary version of the cafe. Thanks to Susan’s creation of the chocolate cream tea, I can see The Twisted Currant becoming a place of pilgrimage for chocolate lovers, as well as gluten-free and dairy-free visitors to Cornwall.  Guest houses, hotels and holiday cottages have now re-opened, if you would like to book your stay in one of Britain’s most beautiful areas, and sample the delights of the Twisted Currant for yourself.

Thanks, More? and The Sequel

It remains only for me to thank Michael and Susan for their sharing their experiences and granting me the use here of some choice photos from their Facebook page. (A rich selection of mouth-watering delights. Deliciously browsable!)

I hope that you have enjoyed our behind-the-scenes visit to one of the special places that have inspired locations and experiences in the Amanda Cadabra books. Please do let me know if you would like some more articles like this one.

Meanwhile, Book 7 has begun its flow. The all-important first paragraphs are written, and more is coming into being every day. And every night, when the characters like to chat to each other! The stream is moving, the blossoms, shops and businesses are opening, and the days are lengthening towards mid-summer. It’s all to come.