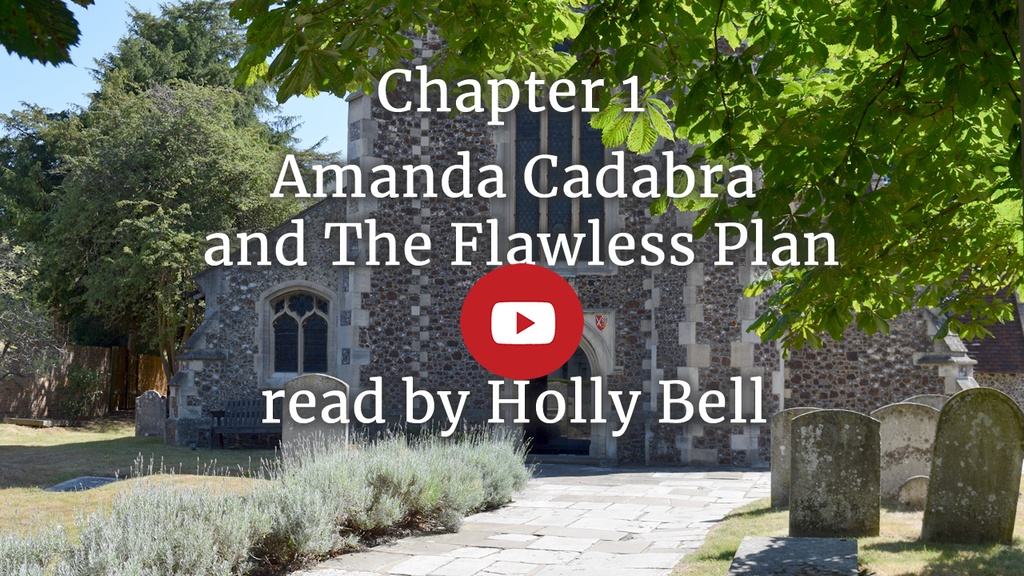 Chapter 1 of Amanda Cadabra and The Flawless Plan

With the book trailer for Amanda Cadabra and The Flawless Plan now out and about here on the site and on social media, it is now time for the new venture to be revealed, a video: Chapter One of the new book read by me. It’s about 12 minutes long. 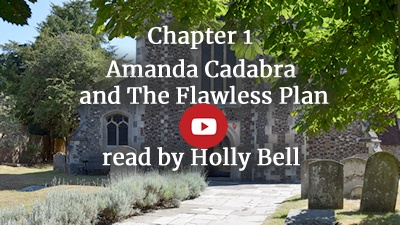 If you prefer to read the text or read it along with the audio, you’ll find it here, below this blog. Please let me know what you think of the YouTube, by leaving even one word on Facebook, Twitter, Instagram, the comments below, or email. Is this something you would like for all of the books?

Tomorrow: the competition. This will involve something old and something new, the village of Sunken Madley and the forthcoming paperback.

I hope that you enjoy Chapter 1 of Amanda Cadabra and The Flawless Plan.

Amanda found her lying on the floor of the crypt. Her head was up against a medieval stone coffin where it must have struck. One arm was hidden beneath the long raised form of the sarcophagus.

She hurried down the stone steps, her soft soles silent as the grave.

‘Please, no, not another body, oh please no,’ she murmured, gazing in dismay at the sight of her friend’s black cassock-clad body.

Amanda knelt beside the fallen rector of Sunken Madley church. There was no blood in the dark brown bobbed hair. Perhaps there was still life. Amanda laid a hand on her shoulder.

The body convulsed. The head turned. The alarmed face of the shepherd of St Ursula-without-Barnet looked up with alarm.

‘Good heavens, Amanda! You gave me the shock of my life. You really mustn’t creep up on people like that.’

‘Oh Rector, I am sorry, I just saw you lying there, and I thought …’

‘Of course, dear, after that dreadful affair at … aha!’

The Reverend Jane Waygood withdrew her arm from beneath the sarcophagus and knelt up, looking at Amanda’s feet.

‘Yes. Trainers. I see why you apparently stealthed up. Well, you’re just the person I wanted to see, and even more so at this moment. I believe your arms are slightly longer, not to mention slimmer, than mine or, at least, those craftsperson’s fingers of yours may be more agile.’

‘You were trying to get something out from under there?’ asked Amanda, leaning down.

‘It’s the keys to the church hall. They slipped out of my fingers and slid away into inaccessibility, and I wanted to have them ready to take you down there. I’m hoping that you’ll be involved in my plot,’ said Jane, in mysterious but hopeful accents.

Amanda was mindful that 5th November, Guy Fawkes Night, was soon to be upon them, celebrating the attempt, or possibly failure, of a group of 15th-century activists to put paid to the Houses of Parliament by the use of then state-of-the-art explosives.

‘If you’re planning to blow it up, don’t you think we should visit it under cover of night?’ suggested Jane’s parishioner helpfully.

‘Oh, if only we could,’ sighed the rector wistfully. ‘Claim on the insurance and rebuild the wretched thing from scratch. Unfortunately, my calling prevents me from engaging in such deception even if it wasn’t a listed building. Meanwhile, do you think you could be a dear and get those keys out from under there?’

Amanda looked at the floor with concern.

‘It’s as clean as a whistle in here,’ Jane assured her. ‘You don’t need to worry about dust setting off your asthma. Mrs Scripps cleans down here regularly. You could eat your dinner off those flagstones. Not that anyone else comes down here but there’s always hope of a rare visitor.’

‘Then of course,’ Amanda replied cheerfully and lowered herself onto her stomach. She reached between the coffin’s carved bears’ feet.

‘Here,’ said Jane holding her phone with the torch app on shining a light into the narrow space.

Amanda pulled out her arm and stood up. She opened her hand, passed the keys to the rector and frowned down at the remaining ite m sitting on her palm. ‘Whatever do you suppose …?’

‘Bless my soul. It looks like a tiny little gold … cup or something. It’s quite thick, and look at all of these close-set wavy marks. Do you think it’s something to do with the sea? A fitting on an instrument that maybe was used on one of the old ships? An ornamental screw cover on a … sextant or something?’

‘Well, whatever it is, it’s the property of the church,’ said Amanda holding it out.

‘An apport. Hmmm. Ask your Aunt Amelia. She’ll tell you about them.’

‘And now to business. You got word through the grapevine, yes?’

‘Sylvia said you wanted to see me about something.’

‘Well, thank you for popping in, dear. Got your car with you?’ asked Jane, leading the way up out of the artificially lit crypt into the daylight in a corner of the west end of the church.

‘I’m taking you down into the bowels!’

With the mask secured, they took the path between the mellow stones of the higgledy-piggledy graveyard to the hall at the boundary of the church property. The rector used one of the newly retrieved ornate keys to open the side door.

‘I had no idea that this door existed,’ commented Amanda.

‘I know, we always herd people through the front. But here we are now. Come inside so I can push the door to, and get to this.’ There, at right angles to it, was another one, also locked. The rector opened it, switched on a light and led the way down some wooden stairs into the space below.

With difficult progress and in insufficient light, they passed between old rolls of carpet and backdrops, cardboard and wooden installations, trunks, suitcases, boxes, crates, a basket of stage swords, a golf bag of spears, and a large vase of Japanese parasols, as well as all manner of paraphernalia that it was hard to identify.

It was unexpectedly high-ceilinged for a cellar, and roomier than the hall because there was no stage or anterooms as there were above. Eventually, they came to an area that was even more challenging to traverse. A group of upright posts of wood were set at intervals, piled around with crates and cases that barred the way.

‘Right,’ Jane began briskly, ‘look up there. See those joists?’

‘They’re rotten. Not too bad for most of it, but along this section here, they’re as weak as water. That’s why the hall has been closed for as long as it has. It’s all a bit unsolid, but here it was dangerous.’

‘Well, I’ve been wanting to repair and reopen this hall for years, but, of course, the church roof had to come first, and now it has … and, well, I didn’t want to ask the kind benefactors to put their hands in their pockets again, especially so soon, without some effort on my own part and contributions from the community, towards restoring this lovely old hall. Except … no one was interested.’

‘— and the bell tower, yes,’ concurred Jane. ‘That was comparatively easy to attract donations to. Well, I said, “If you want this church to still be here for your enjoyment in 100 years, or even 50, you have to be willing to support it,” and so they were. But this hall. You see, it’s only late 1800s or even later and that’s no great shakes, is it?’

‘So, what would make people realise the worth of the hall?’

‘Yes, but what’s the most exciting thing people can do on a floor?’ asked the rector blithely.

‘Erm.’ Amanda was unprepared for the question, and her mind boggled.

‘But no one could dance on a dangerous floor. So … I had it repaired! See, these wooden posts are supporting that group of floorboards above? Taking over from where the joists are rotten.’

Amanda squinted into the gloom. ‘I think I need a better light. Let me go up to the car and get a torch.’

The rector hurriedly picked her way across the stored goods and up the stairs. Amanda stood alone in the dusty silence, her breath contained and amplified by her mask. She felt a little dizzy, her vision fuzzed. Suddenly it was as if something shot down through the ceiling of floorboards above and would have hit her if she had not dodged back, tripping over a wooden case and stack of props. She got to her feet. But there was nothing there. Nothing above or below that had not been there before.

But now there was the faint sound of music. Maybe someone had a car radio on loudly nearby. And yet … there was singing too …. It was a waltz … an old song … Grandpa used to sing it … yes, to Granny … ‘Roses are shining in Picardy … in the hush of the silver dew’, and there was thumping above — no, not thumping exactly — feet … walking — no, they must be dancing … waltzing across the boards above her head, and people singing their hearts out. It wasn’t frightening … there was something wonderful and free and heartbreaking about it all at once. She wanted to be up there with them ….

‘Here we are, dear!’ came the rector’s voice, and, at once, it stopped. The music, the singing, the waltzing feet. As if it had never been.

Thank you for reading. You may enjoy watching the trailer 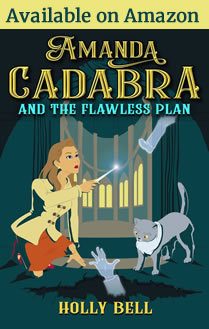 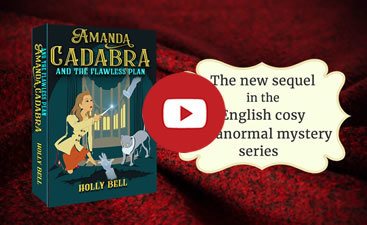