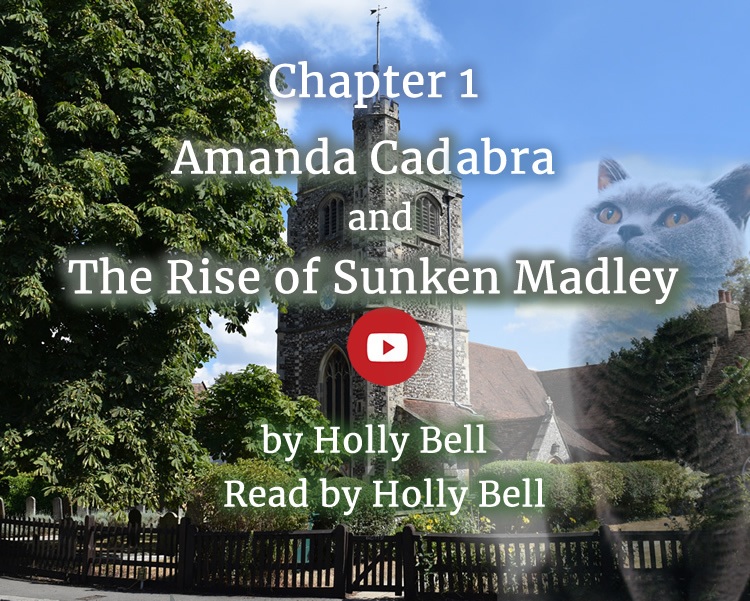 As promised to you, here is the video with visuals as well as my reading of Chapter 1 of the new Amanda Cadabra and The Rise of Sunken Madley. I hope that you enjoy it. Please let me know if you have any thoughts on it. The next is below if you’d like to read it as well. 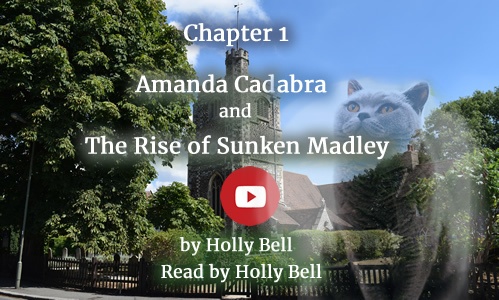 ‘It will all be over very quickly. One way or another,’ said Aunt Amelia. She stared intently into the glass sphere on the round, lace-covered table.

‘Very quickly?’ asked Amanda Cadabra, pushing back her mouse-brown hair and glancing up from following the goldfish. Unlike her aunt, it was pretty much all the ball ever showed her.

‘An hour only, perhaps.’

‘And the villagers? Everyone will see it. If the magical world is supposed to be so secret and the entire Flamgoyne witch-clan descends upon Sunken Madley with fire, brimstone and hurricane, that is going to raise more than a few eyebrows on a whole lot of Normals, assuming that any survive.’

Amelia frowned into the globe ‘The village will empty.’

Amanda looked at her in wonderment. ‘How come?’

‘I’ll have an hour to somehow repel them — without striking a single blow — but the village will empty?’

‘That’s what it showed.’

‘So just me and my … helpers … whoever they will be.’ Amanda pondered, doubtfully.

‘Principal among whom will be Tempest, of course, ‘she added for the benefit of the thick, grey ball of grumpy cat, curled up in the most comfortable chair in the room.

Not that I’m getting involved, he thought. This is a test for my human. But I’ll lend a paw if absolutely necessary. Dear me. The very idea is exhausting. How tiring this species is.

He shut his eyes and went to sleep.

Amanda Cadabra stared at the sky. The thunderous swirl of cloud was racing towards her village of Sunken Madley. She stood at its heart, before the green, opposite The Sinner’s Rue, on the old crossroads. She stood, feet planted apart, wand pointing at the ground, ready. Tempest sat by her side.

‘How?’ she wondered. ‘I’m just a furniture restorer. I have asthma and an annoying cat. I should be in my workshop, polishing Mrs Kemp’s aunt’s commode. How in the world did I come to this …?’

It was a recurring dream, but the situation was imminent, and the question was both real and pressing. The answer might have been said, and was by Granny, to be that Amanda had brought it on herself.

‘If only,’ Senara Cadabra had lamented, ‘you had not cast that spell. The very one your Aunt Amelia warned you not to perform, if you didn’t want to bring the Flamgoynes down upon the village.’

On the other hand, Grandpa, in his light Cornish accent, said that she had had no option.

‘When the crunch came, it was a choice between saving herself and the inspector, or sending up a beacon that Sunken Madley was the epicentre of powerful magical activity.’

Former Chief Inspector Hogarth of the Devon and Cornwall police saw it another way: an opportunity to solve a cold case that was over 30 years old.

Aunt Amelia, Amanda’s confidante and would-be divination tutor since she was nine years old, not only refrained from repeating I-told-you-so but was both sympathetic and constructive.

It was January, one of their regular Tuesday dinners together. Leaving the tea brewing in the kitchen, Amelia Reading, in deep red velvet splendour, sailed into her sitting room, her long dress wafting behind her, and seated herself.

‘Let’s see if the crystal will tell us more about the help that will come to you.’ Amanda, sitting opposite, could only see, reflected in the glass surface, Amelia’s bright brown eyes in a face framed by a chestnut bob. Apart from that, all she ever got was goldfish or a plastic Paris in a snowstorm. This had been the case for more than 20 years. Until now.

‘Aunt Amelia. I see something!’

Her aunt chuckled. ‘Ah, well that does happen in divination if you ask the same question twice or more. You get a joke or gibberish. At least this wasn’t the latter.’

‘The message is the same as the one I got from our conversation about having help to defend the village: find Viola. Except it’s not vee-oh- la, it’s Vie-oh-la.’

‘It shows you’re on the right track, and what a break-through for your divination, sweetie!’

‘You’re right, Aunt, on both counts. OK. So, what do we know about Viola? She was a friend of Granny’s. They met during the war. She was living here back then and told Granny, or “Juliet”, as you called her in your story, that she and Grandpa, “Romeo”, could have a peaceful life here. Yes? There wasn’t any more than that, was there?’

‘So, at least, the crystal ball confirms that this Viola is still alive. Unless … she’s not a ghost, is she?’

‘Was the cello — viola — clear or transparent?’

‘She must be old then …. I’ve thought of three people that she could be — Ah, the tea must be brewed by now. Shall I go and get it?’

‘Oh, use magic to bring it in. It’s perfectly all right here,’ Amelia assured her. ‘I’ve got this place as psychically secure as Fort Knox.’

Amanda pulled a certain Ikea pencil out of her orange woollen jacket pocket, flipped up the end and extracted a tiny slim wooden shaft topped with a citrine. She leaned across so that she could see into the kitchen, pointed the wand and said,

‘Aereval.’ The tea tray, bearing its load of Devon rose-patterned Wedgwood pot, cups, and bowls containing milk and sugar, two silver spoons and a plate of gingernut biscuits, rose from the worktop beside the kettle.

‘Cumdez,’ instructed Amanda. It glided through the air, along the passage to the sitting room and hovered.

‘Sedaasig.’ The tray lowered itself gently onto the table beside them. Amanda would not usually have bothered with a wand, but there was hot liquid involved, so extra control was needed. Hopeless though she was at divination, this was her special, and exceedingly rare, magical talent: a Cadabra family trait inherited from her grandfather. It enabled her, in spite of asthma that was all too easily agitated by physical exertion, to carry on the family business of furniture restoration, with all of its strenuous activity. Of course, any spell-working had to be conducted out of sight of Normals.

‘You were saying, dear,’ Amelia reminded her, adding sugar lumps to the teacups. ‘Three possibles.’

‘Yes,’ replied Amanda. ‘Mecsge,’ she added. The spoons began stirring. ‘There’s Mrs Uberhausfest, who distinctly told me that she and Granny had been friends for over 50 years — and you know how fond Granny is of her, invoking her whenever she talks of how, “we both did our bit in the War”.’ And with her line of work, if anyone could organise a Home Guard, she could!’

‘And the other two?’ enquired Amelia.

‘Sessiblin,’ said Amanda. The spoons stopped stirring. ‘The ladies who live at The Grange. Miss Armstrong-Witworth — the one who worked as a field agent for the government many years ago, I told you? But I gather she always operated alone, so not an organiser, I’d say — well, she and Granny never seemed very close at all, so, out of the two of them, I’d plump for Miss de Havillande. Both she and Granny are strong-minded, outspoken, definitely organisers, and with Views on every subject. In fact, I’d often thought they could have been two peas in a pod!’

Amelia laughed. ‘I know what you mean.’

‘Although,’ remarked Amanda suddenly, then stopped to think.

‘I think I see where you’re going with this, but carry on.’

‘Well. Viola isn’t from Shakespeare’s Romeo and Juliet, is she? She’s from Twelfth Night. She’s the sister, cast up on an enemy shore, who, believing her brother to be drowned, takes on the disguise of man and gets a job working for the local count. So what if Viola is a sort of code name, but for a man?’

‘Or a woman pretending to be a man?’ Amelia hazarded.

‘Possibly, but I don’t think you could live in Sunken Madley and carry off a disguise like that for the better part of a century.’

‘True. What men would be eligible for the role of Viola, then?’

‘Well … old Mr Jackson, but he retired to Eastbourne to live with his son, so I don’t think it can be him.’

‘He’s far more than the butler,’ Amanda pointed out. ‘He’s pretty much run the house and estate for them all these years, and no one knows how old he is.’

‘That gives you four candidates then: Mrs Uberhausfest, Cynthia de Havillande, Gwendolen Armstrong-Witworth and, er — does anyone know his first name? — Moffat.’

‘Yes. And, I gather, Viola will be the means of assembling the rest of the people who will help on the day that the Flamgoynes attack.’

‘What’s your next move then, Ammy?’

‘Well … what I need is a reason to visit Irma Uberhausfest. And soon.’

Fortunately, thanks to stilettos, a spanner and a piano, one was in the making.

I hope that you enjoyed Chapter 1.

Looking forward to bringing you news of the paperback launch, and a suggestion for Hallowe’en.