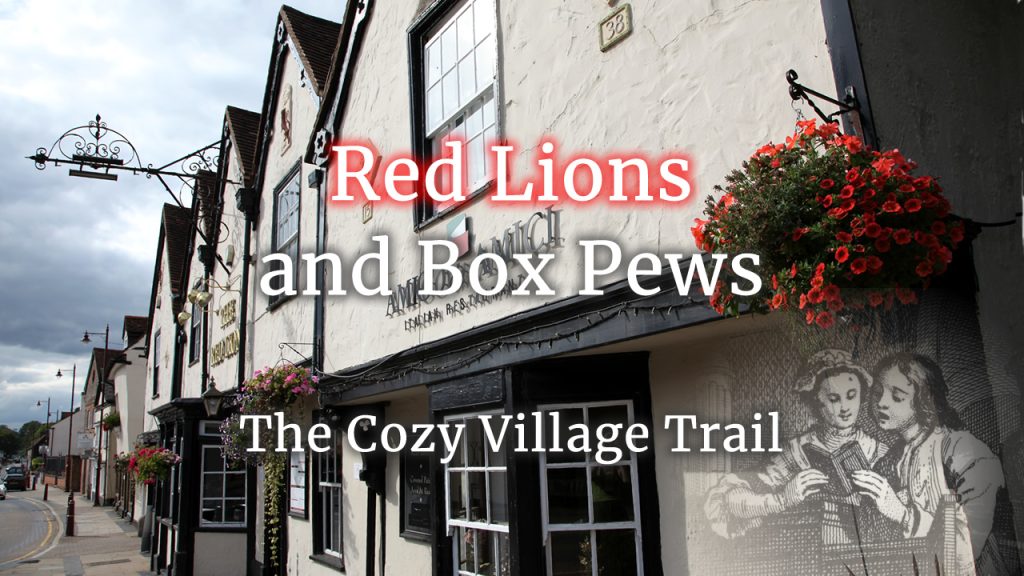 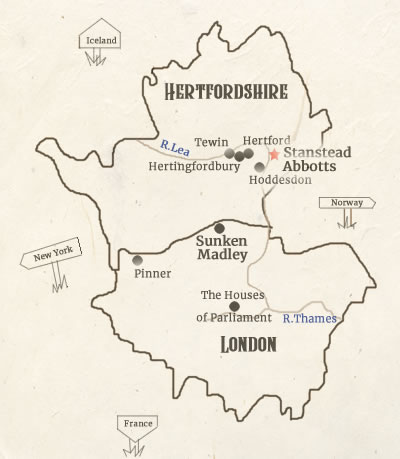 Today I take a brief break for editing Book 7 in the Amanda Cadabra series to bring you the finale of my 2021 search for the cozy village (which I intend to take up again this spring). Having found the apple of the my dreams, I went in search of lunch at a 16th century hostelry in nearby Standstead Abbotts.

Stanstead Abbotts (also spelled Stanstead Abbott) bears the distinction of having been recorded in the Domesday Book of 1086 – a sort of survey of the taxable resources and power bases of the country of that time. The village was called Stanstede, and the Abbotts was added probably because it passed to the abbots of what is now Waltham Cross. Its main claim to historical fame is that, apparently, it was given to Anne Boleyn, second unfortunate queen of Tudor king Henry VIII.

There I found a splendid 16th-century pub with a kindly and knowledgeable host. He showed me around, explaining that the building began life as a monastery in 1538. Thereafter, it morphed into a coaching inn and finally The Red Lion pub. You’ll find a lot of Red Lion pubs on these shores. Why? 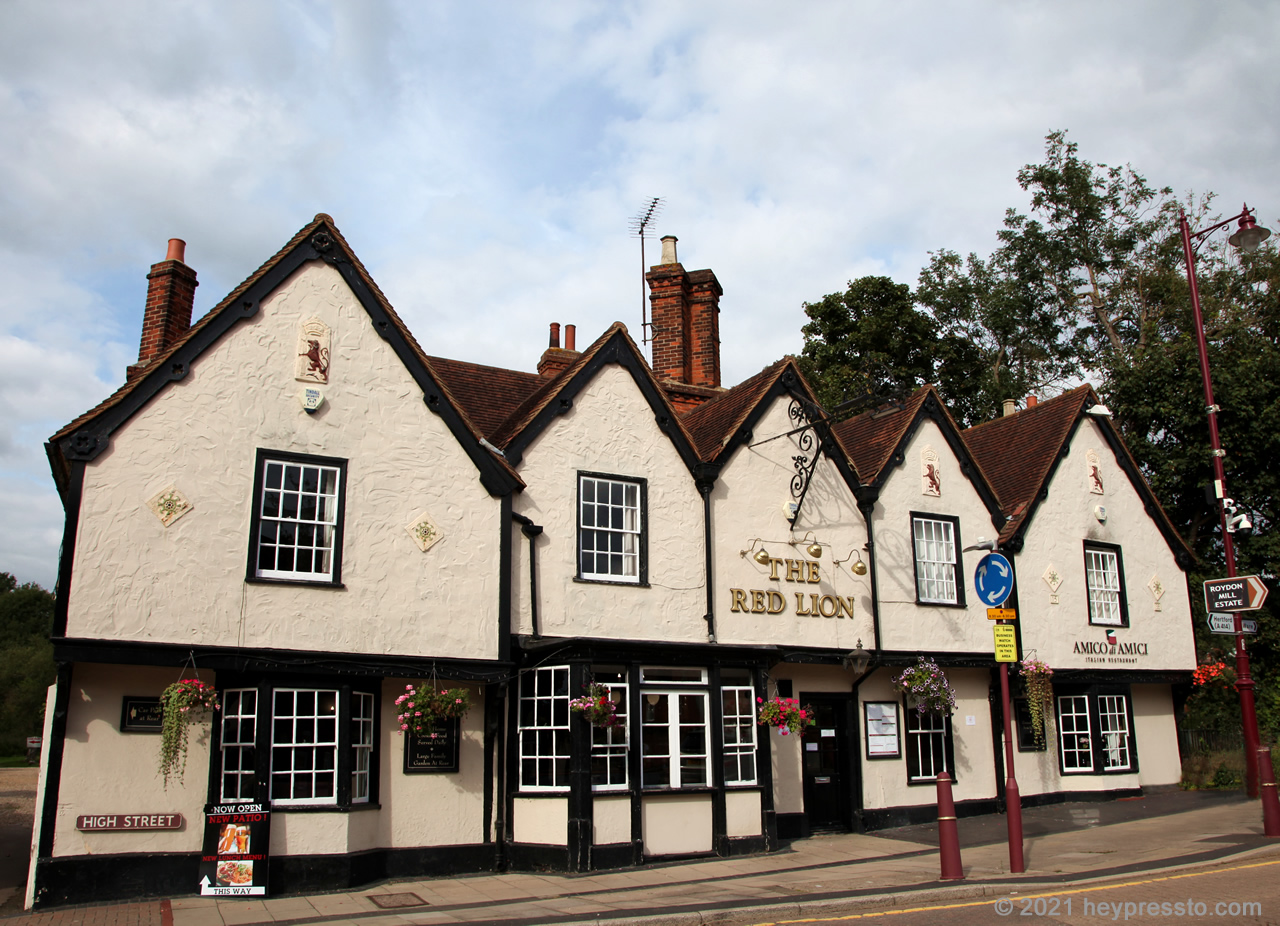 There are two schools of thought: one is that it was an emblem on the coat of arms of the house of Lancaster (more of them next week!), which was a major player in the fortunes of these isles. The second is that it dates back to when James IV of Scotland became James I of England in 1603 after the death of Elizabeth I. The story is that, on his triumphant procession into London, he commanded that the Scottish heraldic symbol of the red lion be displayed on all public buildings, including necessarily, inns and taverns. To date, there are 547 Red Lion pubs in the UK.

In just such a setting, with aged beams above and a large brick fireplace warming the room, you would expect to find Amanda Cadabra and Detective Inspector Trelawney discussing murder and lunch. The Sunken Madley pub, of similar antiquity, is, of course, The Sinner’s Rue. The Christmas Ball of Book 2 in the series, Amanda Cadabra and The Cellar of Secrets, is set in the function room above. 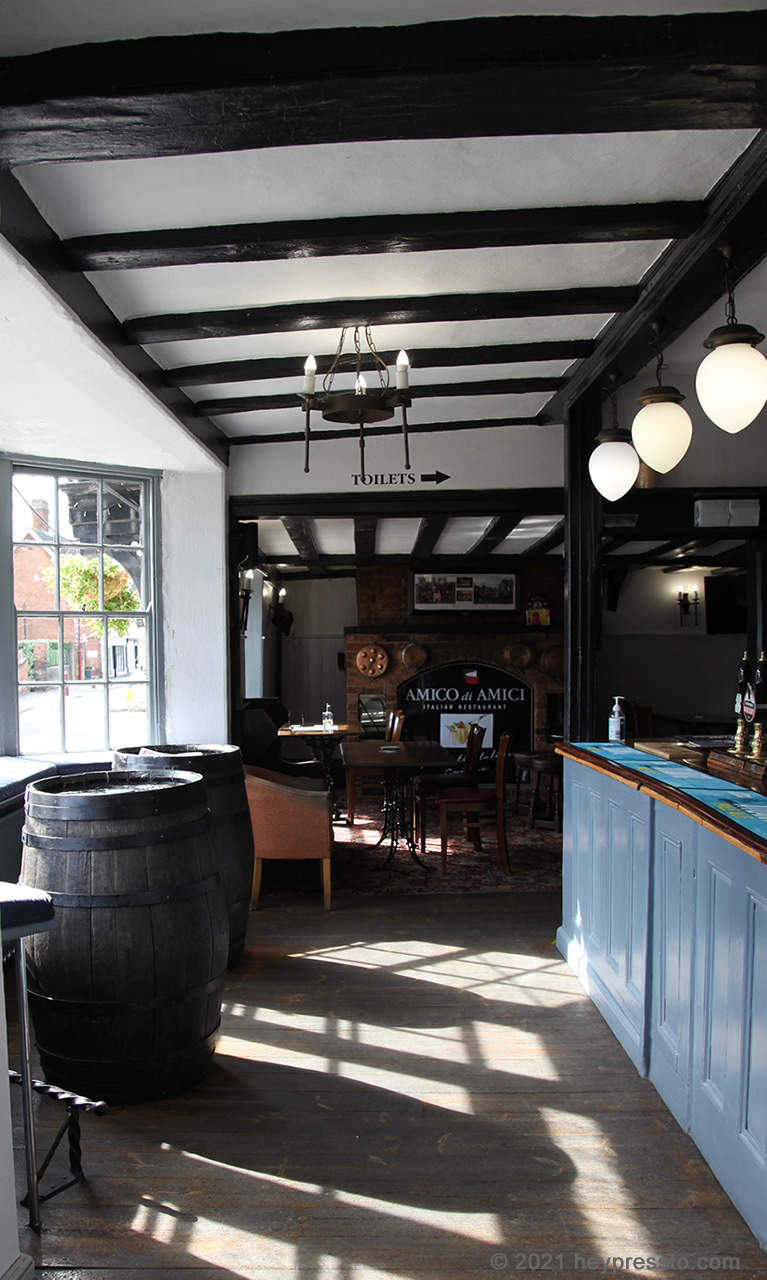 But back to the Red Lion. The restaurant within the pub is the warmly named Amico Amici, and, from their tempting menu, I ordered lasagne. While I waited, my host brought some historical papers relating to the sale of the pub as it changed from owner to owner. On the yellowing formal documents of sale, written in a fine italic hand, were details of everything a new buyer would find on the premises. My favourite was the mention of a ‘beer pulling engine’. A mystery! Enthralled, I enquired of my host what this might import. It’s what we’d call a tap, the large vertical handle you see on a bar that staff pull to allow the amber nectar to flow into the waiting flagon below.

Bidding farewell to the friendly manager and staff, I set out from The Red Lion. There was one more stop to make. To the 13th century. 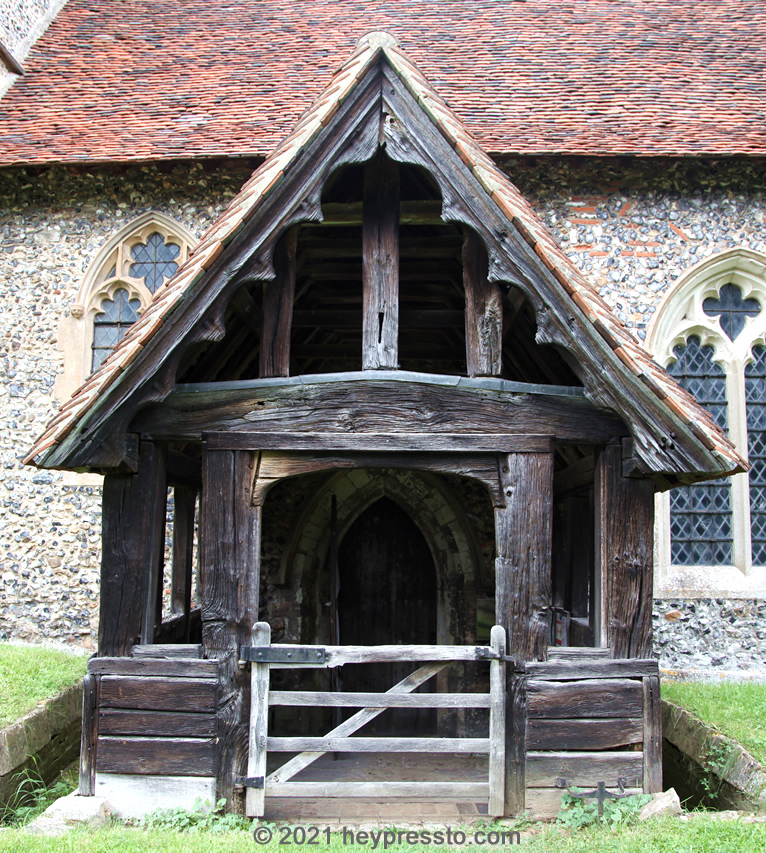 There is a mention of a priest of the village in the Domesday Book, and the original church of St James is thought to have been Saxon. The present structure is primarily 18th century, but there are parts hundreds of years older, so I made sure to photograph the good bits for you.

This porch is 15th century, and the doorway inside is 13th century. As you pass under the small wooden roof and place your hand on the stone as you enter the church, all at once you are united with the hundreds, if not thousands of feet that have trod the same surface, of hands that have touched that same place: worshippers, penitents, crafters, builders, theology and arts students, and, like me, simple tourists who admire architecture and have a love of history. And of course, who are in search of inspiration for a notable feature of Amanda Cadabra’s village: Sunken Madley’s St Ursula-without-Barnet, which is also a medieval church.

In the nave, I found the strangest pews I’d ever seen. These, I learned from the guidebook, are called box pews. That’s 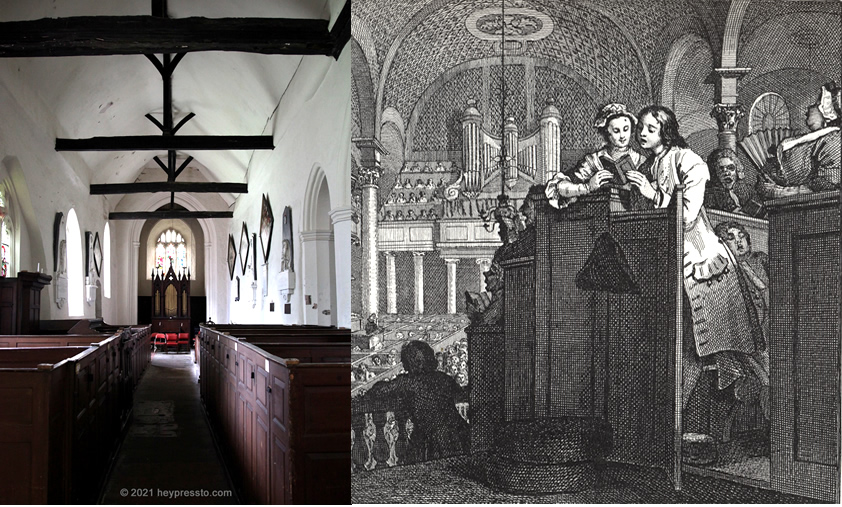 right, they are literally boxed in with high wooden partitions. Here we have another link to the Amanda Cadabra series. These are shown in an engraving by the artist William Hogarth, namesake of our very own former Chief Inspector Hogarth of the Devon and Cornwall police and Thomas Trelawney’s boss.

You can see the pews in the second of William Hogarth’s series of Industry and Idleness here. The idea was to give the parishioners privacy. Back in the more austere days of the 14th century, there was nowhere to sit in churches. After that, wealthier parishioners got their own seating, in their own private pews, nicely enclosed and even including a table and fireplace! (And affording an opportunity for a covert nap) This did no favours to the organisation of the interior space of the church. So the ecclesiastical establishment gave in and had ordered rows of pews built with a central aisle for symmetry and a, no doubt symbolic, path to the altar.

Finally, the last photograph taken, I returned to the car and took the road south to what was once the kingdom of Middlesex, and home. The summer, astronomically speaking, was over, but there will be more field trips and photoshoots to come. Not only that, but there are developments with the new book, the seventh in the Amanda Cadabra series, to share with you.

More of that, next time.