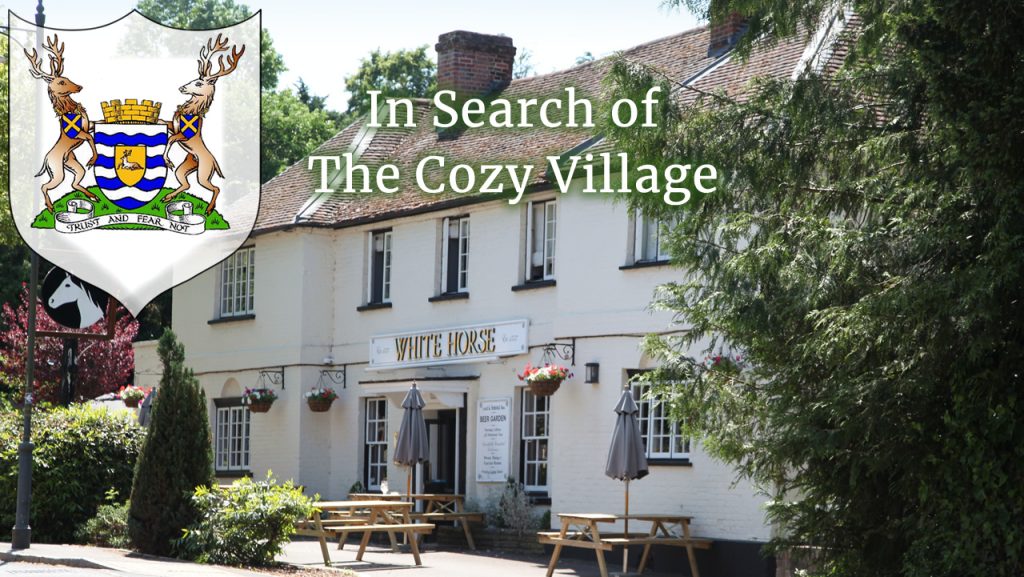 On The Trail of The Cozy English Village – Hertingfordbury

What is a Cozy English village? 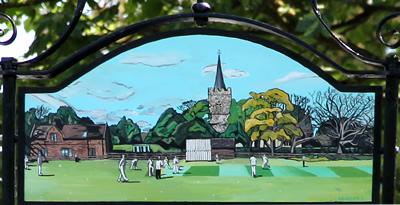 Sunken Madley is a fictional creation for the Amanda Cadabra series, based on the location of a real place. It has its own distinctive character and characters. Into the mix, go all the most endearing features of both real modern villages and some more traditional ones.

I remember reading a quote about the ideal English village where it is eternally the summer of 1932, with cricket on the green with scones and homemade jam. ‘Stands the church clock at ten to three? And is there honey still for tea?’ as Rupert Brook’s eloquent, poetic tribute the English village asks.

You can have a taster of this in the Inspiration section of this website. However, this summer, it has been my goal to offer you much more, both in the letters to readers here and in the gallery of photos under the Inspiration tab. And so I set out on a new tour of Hertfordshire, the county just to the north of Greater London.

What’s So Hot About Hertfordshire?

The village of Sunken Madley, as you may have read, lies just 3 miles south of the Hertfordshire border (and 13 miles north of the Houses of Parliament). It is still, in spirit, a somewhat rural community. To give you some insight into what the village looks like, it is my pleasure to travel through this particular county in search of, in particular, 16th century, cottages, pubs and churches.

And so, on a glorious summer’s day, my pilgrimage to Hertingfordbury, from who sign the above image is taken, began. 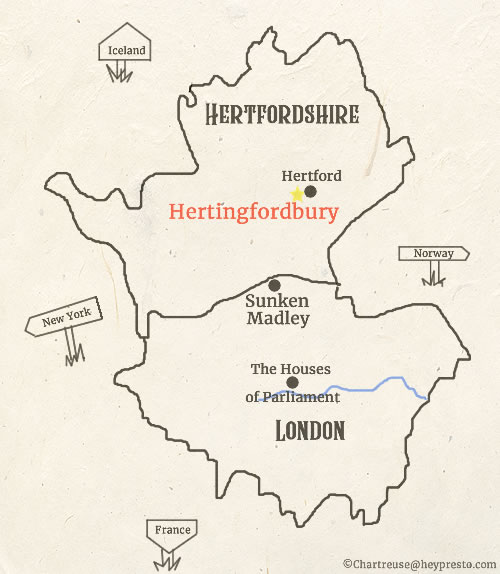 The village has that oh-so-desirable mark of topographical distinction: an entry in the Domesday Book of 1086. There the name is spelt Hertingfordberie, which means “Stronghold of the people of Hertford.’ So it existed before the Normans moved in and started transforming Britain from a Scandi-land to a more French one.

At this point in historical documentary research into what was where and who owned what, it does help a bit if you can fathom the depths of such phrases as ‘with sac and soc, toll and team, infangthief and outfangthief’. In case you’re intrigued by this detail, it meant that, if you had all of those, you could charge me, for example, for the privilege of crossing your land, and take me to court if I rustled your cattle or borrowed your garden rake for too long.

Getting back to Hertford, though. It is the county town, the capital, as it were. It has a number of notable agéd buildings and so is on the list for a visit. However, as it is a town rather than a village, other places have won priority. Nevertheless, it’s a good way to locate Hertiingfordbury, which is just to the West. 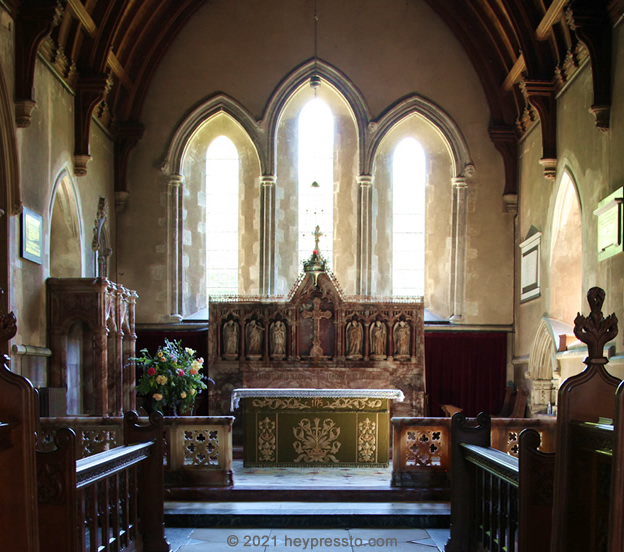 I began at the church of St Mary’s. The highlight of the interior is the 13th-century set of three tall pointed windows in the east wall (that’s the one opposite the entrance). Or, if you’d like a more tech spec: ‘a triple lancet’, ‘each is lancet having moulded arches and shafted jambs with moulded capitals and bases’.

Little of the 13th or 15th-century church has survived the dreaded Victorian restoration processes. However, let’s not be too hard on the Victorians. The chances are that St Mary’s would, by now, be but a pile of flints and stoneware, oft-raided by local builders over the last two centuries, if eager Victorians hadn’t done the best with what they knew and had at the time.

Now for St Mary’s greatest claim to fame. The churchyard contains the unmarked grave (to be located on a future visit) of one of the last women in England to be sentenced to death for witchcraft. Her sentence was pronounced in 1712, but she died in 1730. How can this be?

Saved by The Queen

Mrs Wenham was reprieved and then granted a royal pardon by the then monarch, Queen Anne — who is probably best known for the style of furniture created during her tenure of the throne. As some of the villagers had ganged up on the widowed Jane, it was suggested that she move to elsewhere in Hertfordshire. Wiki’s account of the trial is entertaining and showed the attitude of the better educated of the time towards accusations of sorcery.

In any event, Jane lived on and, in our century, inspired two plays.

Two Gentlemen and a Bucket 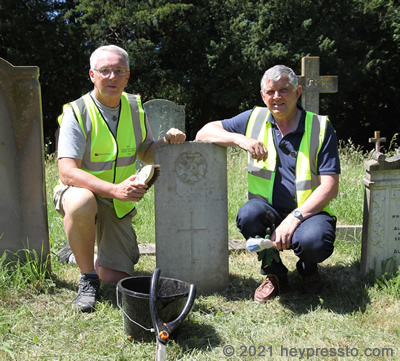 Now we come to the most exciting aspect of my visit to the church. Whilst wandering amongst the headstones, as one does, I noticed two gentlemen in hi-viz vests near one of the graves. Intrigued, I approached and hailed them. That was when I noticed the bucket.

Soon we were chatting away and exchanging why we each were there. My two fellow visitors were from the CWGC, the Commonwealth war graves commission. Each volunteer visits 5 graveyards near their home and keeps any graves between 1914 and 1945 cleaned and weeded. If anyone knew old churches in the area, it was these two gentlemen.

Having explained my mission, they at once suggested that my next port of call be the borough of Broxbourne and the town of Hoddesdon in particular. There I should find the riches I sought. It being midday, we then made our separate ways, to, naturally, the village pub.

No, not the Bavarian hostelry of operetta fame but the 400-year-old tavern down the road from the church. Here, at a wooden table, in the sunshine, I feasted on a crisply fresh prawn cocktail and chatted with the amiable staff there. It was an idyllic country lunchtime. But there was more. 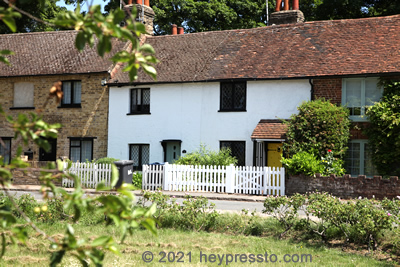 Opposite the inn were some cottages dating from 17th century, including one intriguingly named The Old Bakery. The deal with very old buildings is that they are more likely to be still standing if they have been in use.

If they have been, in particular, lived in, then it is only reasonable that the inhabitants will have wanted to maintain it to have a desirable level of comfort. This will mean a balance between harmonizing with the existing look of antiquity and modern technology and health and safety standards.

Consequently, you may see, for example, ye double-glazéd 21st-century windows on a 16th-century cottage. However, the owners are maintaining the house for posterity, while honouring the legacy of the original builders, which was, after all, a cosy place for people to live.

Photos taken, local food sampled, the church visited, and the next destination lined up, it was time to up stumps and make for home (and the writing desk, of course).

Next stop then: Hoddesdon,