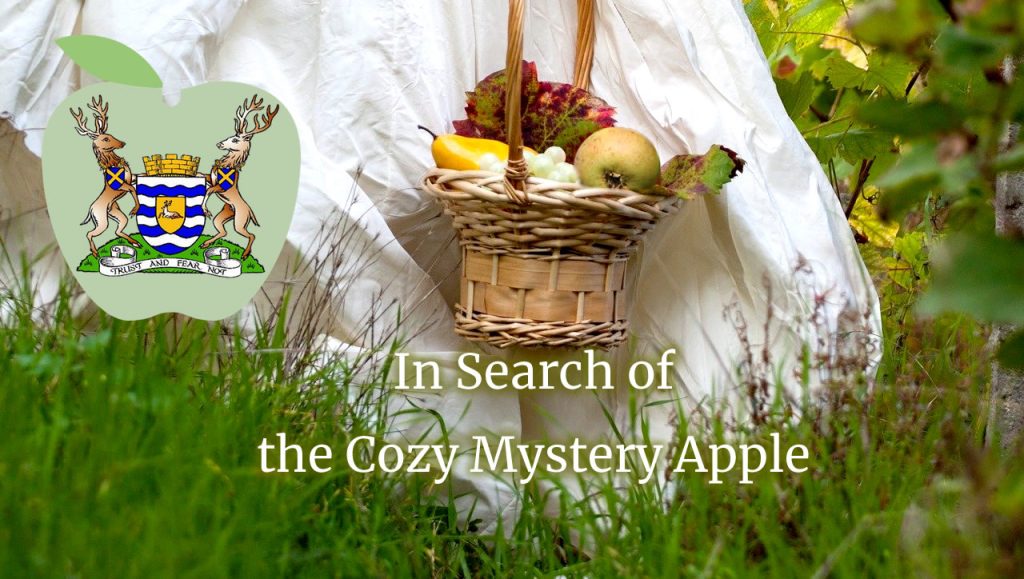 I Meet My Apple – A Love Story

The Day We Were To Meet

It was our first date. I chose my clothes with care. I even felt, oddly enough, a little nervous. Would this meeting be all 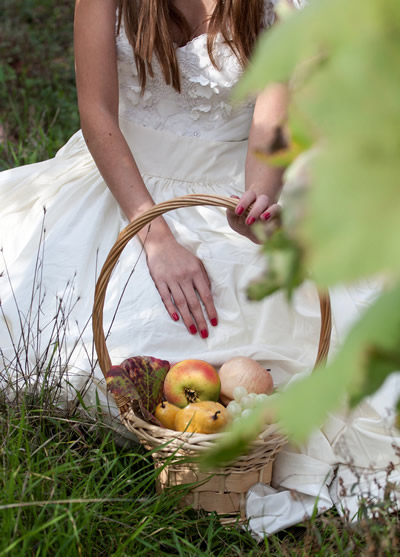 that I hoped? I’d seen photographs, of course, but today was the day when I’d see The One in the flesh. There was something of an age gap. In fact, that was not the only gap.

For I was going to meet the apple of my eye, rare, ripe and two hundred years old. And it felt like a date. This was the day that I would see with my own eyes, for the first time, the Hormead Pearmain. Three years ago, I’d never heard of it, or indeed, thought all that much about apples in general, let alone an obscure variety. And yet, since 2018, it had taken on a life of its own and even a personality.

The Orchards of Sunken Madley

As you may have read in a previous Letter to Readers, when I created Amanda Cadabra’s quaint English village of Sunken Madley, I knew that it would have strong rural connections, in spite of being, technically, in the county Greater London. Nevertheless, it is practically on the Hertfordshire border. I did my research and discovered that, once upon a time, the county was known for its orchards. A hundred years ago, there were 800 of them. Even now, there are a staggering 400. 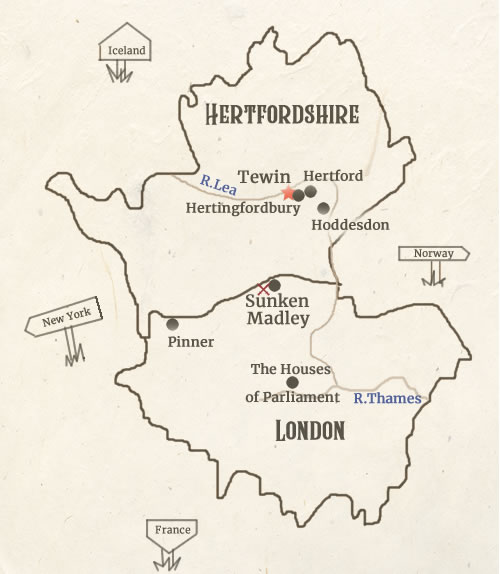 And so, in my mind, apple trees grew up around Amanda’s village, and the variety would be the Victorian Hormead Pearmain. My journey to find the particular fruit I was to finally to photograph today was one that had taken some persistence and something of a fascinating detour. However, on a fine Sunday morning, summer edging into autumn, I reached my destination.

Although, when I chose the Hormead Pearmain, I had confidently imagined I would easily find entire orchards full, it turned out that the trees are scarce and precious. One of the very few places to see one, and bearing fruit, was the Tewin Orchard Nature Reserve. It is a village orchard near the River Mimram and not far from the Hertfordshire town of Welwyn Garden City (pronounced well’-in). The orchard lies only a mile or so from Hertingfordbury, where my round of summer field trips began.

The warden of the orchard is none other than the celebrated Hertfordshire naturalist, Michael Clark, author of a Apples: A Field Guide. When I drove up the little tree-shaded drive, I saw Michael sitting on a chair, reading a book. He looked up with a welcoming smile, directed me where to park and soon we were on a short walk to reach the two apple trees. Michael left me to my photography with an invitation to come up to the cottage afterwards for refreshments. 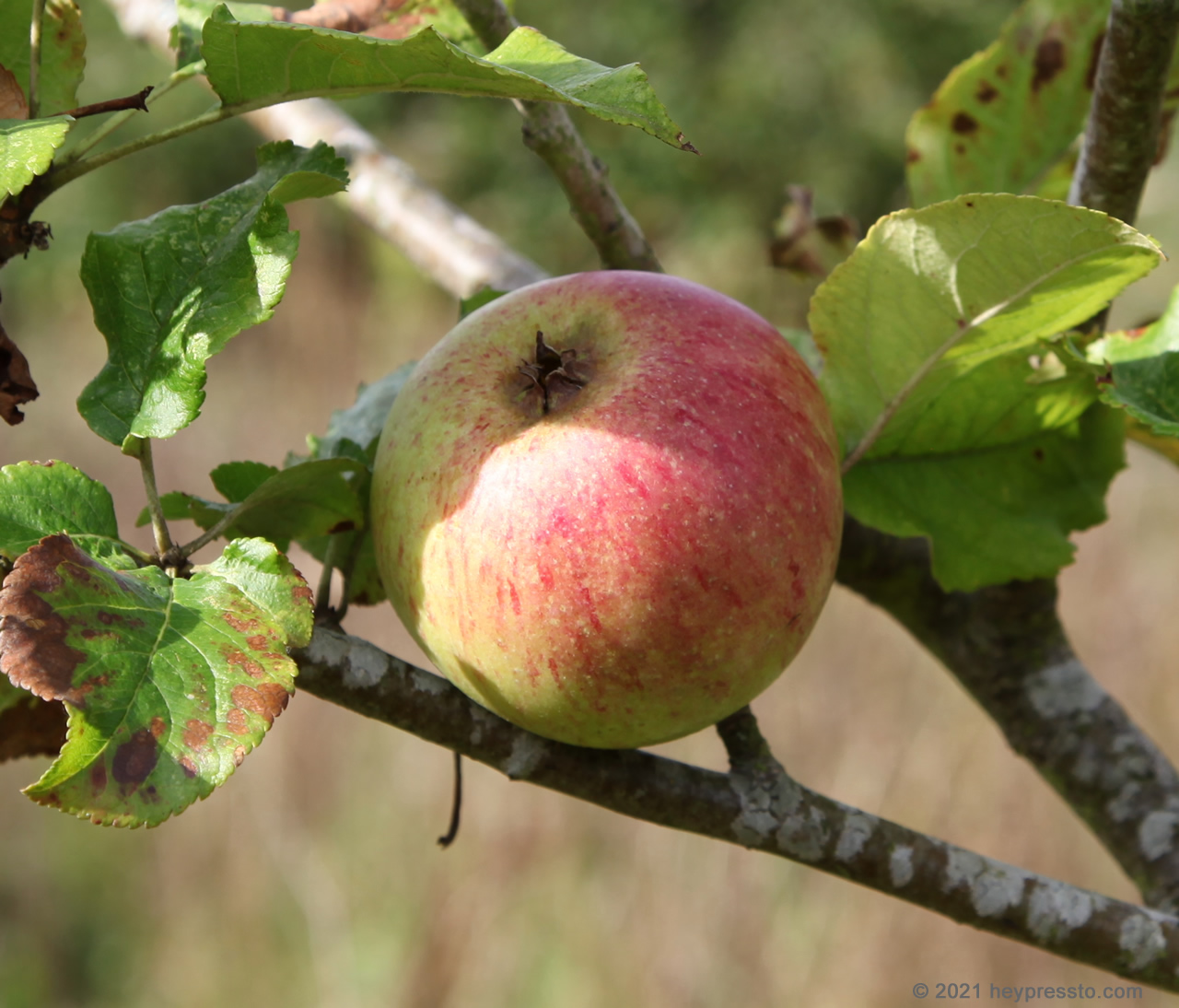 And there is was, on the tree which not so much taller than I am, in green and red, plump and perfect: my Hormead Pearmain. As you can see in the photo below, there were, in fact, four apples on the young tree, but there was one that was the best. I photographed and filmed, watching for the best light as the sun went in and out of the clouds. Time flashed by until I felt I had all I could get.

Up at the house, I met Anna, Michael’s talented and kind wife. I had marvelled at the beauty of the garden, which is her creation. I spent a fascinating hour with them, hearing stories of how they met and the delightful history of the cottage. Michael gave me 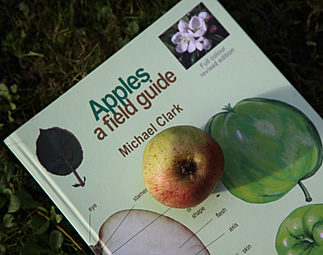 a map on which he pointed out a breathtaking view of the Mimram valley, and so there is a future destination for a field trip, perhaps in the spring. Although Michael seems to regard himself as but an amateur artist and photographer, all of the beautiful illustrations in the book were painted by him, and he also took all of the photographs.

I came away with a gifted copy of Michael’s book and … the apple, which he invited me to take. I went back for more photographs and film, and my last act was to pick that finest fruit. I stored it lovingly in my car to be taken home.

However, the day was not yet over. I had arranged to lunch in the village of Stanstead Abbotts, some 9 miles away to the east. But that is a story for next week.

This story would not be complete without the purpose of the apples of Sunken Madley being fulfilled: to be eaten. 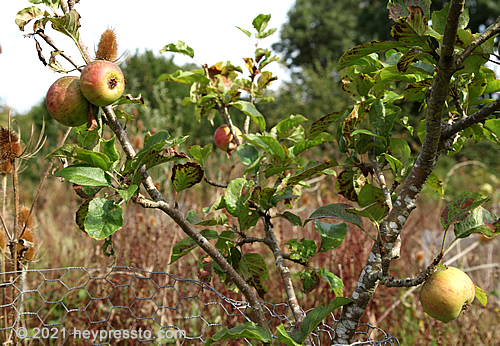 The choice fruit sat there for a few weeks. I kept thinking that I must cook something unique, but there always seemed to be something more urgent or important to do. Finally, the moment came. The Hormead Pearmain is a cooking apple, and I decided to make something very simple, and to be fair, quick. Chopping it up, I couldn’t resist sampling a piece. This was a revelation.

Over the course of my life, I’ve eaten a few varieties: Golden Delicious, Cox’s, Granny Smith’s, Jazz, Braeburn, Bramley, Pink Lady, Royal Gala and Russet, to name the most popular here in the UK. In my experience, apples are dense in texture, a little tart, sweet, and above all, apple-y in flavour. This is what I expected. However, the Hormead Pearmain was light and airy in texture. Yes, it was a tang of tartness, but then came layers of flavour: not just apple but that of pears, cherries, apricots and peaches. It was astonishing. A world of fruit trees in a single fruit. And that from a cooking apple. 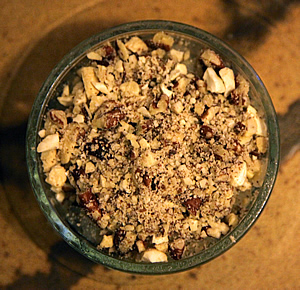 I didn’t want it all pureed, so it needed very little heat. I put it in a ramekin and added a topping of crushed pecans and cashews. Every bit was a delight. The pieces melted in the mouth, the nuts put back the crunch and set off the softened fruit that was still sending waves of flavour. I can hardly wait until this year’s apple season to go back for more.

So, there you have it. I do hope that one day you have the opportunity to meet and sample Amanda’s apple for yourself. In the spring, I hope to return to photograph the Hormead Pearmain in bloom and bring those to you here.

The reviews on Book 1, Amanda Cadabra and the Hidey-Hole Truth have shot up from around 100 to almost 250. I would like to express my heartfelt appreciation to everyone who has so kindly taken the time to express their enjoyment of the story. I literally gasped, put a hand to my heart and teared up every time I saw the numbers jump. Also, thank you to everyone, especially in the last month, who has followed me on Bookbub, rated or reviews the books on Goodreads, joined the newsletters, downloaded, read, bought, recommended any of the books and even written to me. I am immensely moved by your appreciation and support, and feel all the more inspired to bring you the best sequel possible, as soon as possible!

Meanwhile, next week (when I also hope to bring you some news of the progress of Book 7), I shall finish the story of my extraordinary day in Hertfordshire. For there were more delights to follow. This was the highlight of the summer. Of course, at that time, I was not to know what an extraordinary December awaited. But that is a moment I shall always cherish: when I met my apple.