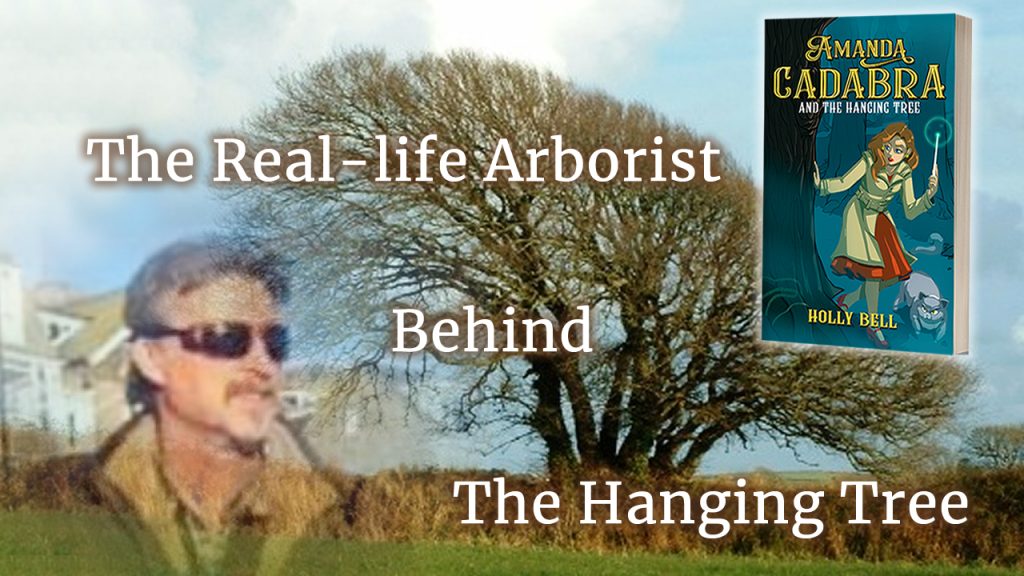 The Real Life Arborist Behind ‘The Hanging Tree’

The Seed of An Idea 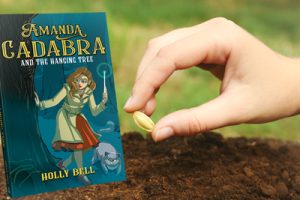 I knew from the very beginning that trees were going to be involved. After all, the book, Amanda Cadabra and The Hanging Tree, was going to be set at The Elms, one of the principal grand houses in the village of Sunken Madley.

We’d had action at The Manor and The Grange. Now, with Detective Inspector Thomas Trelawney establishing a base there, it was only a matter of time before dark and nefarious deeds would be committed at the establishment named after some trees. And, of course, only covert witch Amanda and her irascible familiar Tempest would be able to get at the truth of what happened. That much about the sequel, the seed, if you will, of the seventh in the Amanda Cadabra series was planted long before the ‘official’ writing of the book began. Little did I know that that seed would lead me to a rosebud. 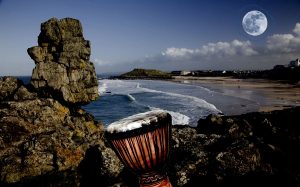 But what did I know about trees? Possibly like you, I can spot the obvious ones and, thanks to training in furniture restoration (yes, I really did) for a year and a half, some interesting data about wood has come my way. Elms, though? One fact usually springs to mind, which is that they are prone to Dutch elm disease. However, there must be far more to them than that.

Duly, I scoured the Internet for information. As I learned about the various species, the notion grew of including a Cornish elm because Sunken Madley does have a strange connection with that magical dutchy in the southwest of mainland Britain. What I needed, then, was an arborist. And not just any cultivator of trees, one with a knowledge of Cornish elms. Where was I to find such an expert?

In my online digging, I came across a most helpful organisation called Cornwall Wildlife Trust and ERCCIS: The Environmental Records Centre for Cornwall and the Isles of Scilly (which are just off the Cornish coast). I emailed and waited.

The Root of the Matter

Ten days later, I received a kindly reply from Mrs Fox, a knowledgeable lady who gave me a summary of the elm situation and mentioned two leads to further information, including the name of a ‘woodland consultant in St Ives’. Mrs Fox offered to forward my email to this gentleman, Gavin Nicol. I eagerly accepted.

Once we connected, Gavin generously gave me more than an hour of his time, filling me in with all sorts of details about Cornish elms, their history and their connection to the culture of Cornwall. It was a fascinating phone call, and I had pages of notes by the end of it.

During our conversation, I heard for the first time of the Davey elm, a remarkably beautiful species found in Cornwall. At that moment, I knew this would be central to the story. But I will leave it there lest I come perilously close to a spoiler, in case you have yet to read the book. 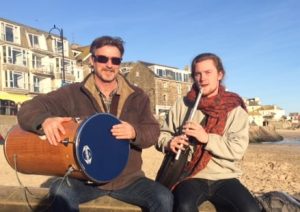 Instead, please allow me to introduce you to Gavin, who has kindly allowed me to interview him, as you can read below. Gavin is not just a naturalist but is also a filmmaker, musician and founder of Global Jamming. This organisation encourages and provides opportunities for young mu

sicians (here is Gavin pictured with his son) and, through

Gavin is also the producer and co-director of the short film ‘Rosebud’. This is a loving tribute to the epic 1937 voyage of the boat that sailed from Cornwall to the Houses of Parliament on a special mission to save the homes of fishermen and their families.

1. What is your connection to Cornwall?

I was born in St.Ives, Cornwall and have spent most of my life here, when not working as a forester in various parts of the world. I have a deep connection with the wilds of my home area and am actively involved in looking after them for the long-term benefit of all.

I am a teacher, musician and activist for social and environmental justice.
I run a musical collective platform with my son called Global Jamming – www.globaljamming,org

I have been under the spell of trees, woodlands and forests from an early age – along with the moors, tors, coast and sea.

4. What is the relationship between elms and Cornwall?

Elms have played a central role in the ecology, landscape and culture of Cornwall for thousands of years. In spite of waves of Dutch Elm Disease, there are still many fabulous elms in Cornwall if one keeps an eye out for them.

5. Can you tell us about the Davey elm, please?

It’s a particularly beautiful and quite unusual type of elm found in any concentration in a couple of areas. These trees form large rounded crowns of dense twigs and are a beautiful site to behold at any time of year. I have been propagating them from cutting for a few years and have some promising specimens growing at one of my conservation sites.

6. You’re also a filmmaker. How did you come to make Rosebud?

I wrote my song about the Rosebud after discovering that the famous Newlyn fishing boat was the very same one my dad had owned when I was a child. I contacted various other people connected with the Rosebud and made a film about its story, mostly set in Newlyn and linking the past with the present. It was an important legacy project for me – my dad was able to enjoy the song shortly before he passed away last year.

7. Your film includes Cornish. How do you think the language is relevant today?

The Cornish language embodies so much Cornish heritage and history that it is essential to keep it alive and growing.

8. Getting back to trees, how did you feel about being the inspiration for a character in Amanda Cadabra and The Hanging Tree?

Surprised and quite pleased to hear it! Thanks for your interest in this important and fascinating subject.

9. Do you think trees have a special magic of their own or that just something people like to believe?

To me, all things have a special magic – not least trees and people. People’s beliefs are just an attempt to grasp at what’s beyond our understanding.

10. Where can we watch Rosebud?

It can be found on our website, along with various other films we have made – please see link. Hope you like it!

Thank you, Gavin, it’s been a pleasure getting to know you, and I greatly appreciate your help.

The new sequel, the eighth in the Amanda Cadabra series, has now reached 70,000 words, so the first draft is well over two-thirds complete. I am having a whale of a time filling in the blanks, moving bits around, researching the details, and being entertained by the characters in the process. To give you some idea of the rate of progress, generally, at least 1,000 words are being added daily.

Ah, and as you may have seen on the Holly Bell Facebook page: I received my Grade III Cornish language exam results. I am delighted to say … (pause for effect) I passed and just half a mark short of a distinction. Next month, on to the fourth and final grade. Summer classes are preparing me, but I must admit that my head is firmly in Bookland at the moment.

So now, back to weaving the new tale for your enjoyment this autumn (or spring in the southern hemisphere) with updates for you, to follow. If you are north of the equator, may I wish you joy of the closing days and weeks of summer and, as always,