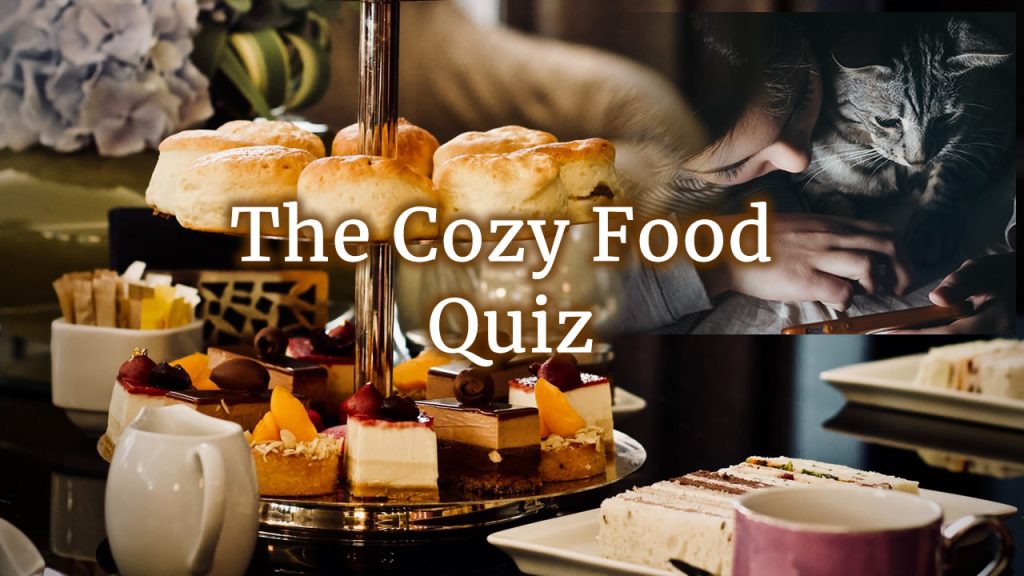 Boxing Day Special: How I Made A Cozy Food Quiz For You 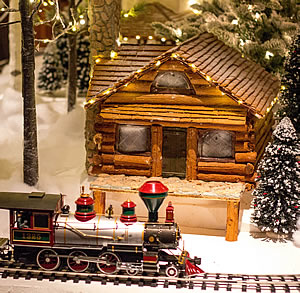 I built it, but no one came. At least, no one that I was aware of. And so it was left to languish … until ….

A few years ago, I came across a quiz feature on Facebook and thought it might be jolly to make one. And it was. But as I say, it didn’t seem to take off.

The seed of the idea was planted about a year ago: perhaps I just hadn’t built it in the right place. The seed itself was something for amandacadabra.com called Quiz Builder. To get technical for a moment, it came from Thrive Themes. (That’s the set of plugins here, on my WordPress site, which helps me make attractive pages more easily than I otherwise would.) The Quiz Builder looked interesting, but the time was not apt. 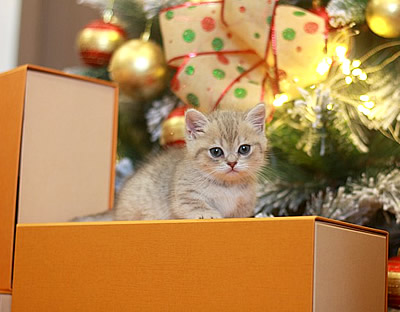 The long-awaited news from Bookbub came, announcing that, after three years and numerous attempts, Book 1 was being granted a space in one of their coveted emails to almost three million cozy readers. This would mean new visitors to the website. What could I do to make it more fun, not just for the new guests but for those precious readers already subscribing and regular visitors? What could I create for a Boxing Day Special for 2021?

The sound of heavenly choirs rang out: Quizzes!

What They Tell You

When you seek enlightenment on this interesting subject, you will be assured, either directly or by implication, that creating a quiz is a quick and simple procedure. In a matter of minutes, you can have yours up and running for the delight of your visitors.

Although that is to some extent true, it only applies if you use the format provided and don’t include images, or just one or two. But you, dear readers, deserve something more appealing, intriguing and exciting. So what’s the procedure?

Let’s take a 10-question multiple-choice quiz. First, think of a theme. Let’s take food. Everyone likes food. But, for you, it has to Cozy Food. What is that? Well, in this case, it’s the traditional British food in Amanda Cadabra Book 1. Things like jam roly-poly, crumpets and spotted dick. So off we go with compiling a list of 10 food items from that book. Next, check that they are actually in the volume. Ah … here are two that appear later in the series. Think of two others and check them. Got 10. Good. Next?

For every correct answer, as this is multiple choice, there needs to be three incorrect ones. Simple? But they mustn’t give the game away regarding other subsequent questions. Hm .… Done. Next?

Having typed them in, I could see that lines of text could do with some visual enhancement: a photo for each question, to 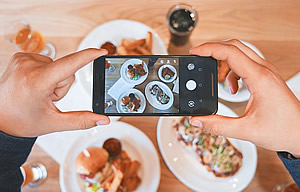 charm and stimulate. On the shopping list: At least 10 images. But where are they to come from? Pending the acquisition of a picture researcher and a Shutterstock account, I set out on the internet in search of public domain images. In case this isn’t your area of expertise, that means that anyone can use them for anything.

However, you can’t always find exactly what you want among them. Either because there is no photo in the public domain, or it isn’t sufficiently high quality. And you, dear readers, deserve the best that I can summon.

Let’s take marmalade roll. In the Cozy Food Quiz that I have written, there is a question with four images, one of which is this scrumptious pudding. The question asks you to pick the correct photo that portrays it. There is no image of marmalade roll that I could find in the public domain that clearly and accurately renders this tasty dish. Where to go? What to do? Leave you marmalade-roll-photoless? Never! And so …

The Hunt Is On

I go to Google, as one does, and type in ‘marmalade roll’ and later also ‘spotted dick’ and click on the ‘images’ tab. I search beyond the Checkpoint Charlie of paid-for-site stock images and look for those posted by websites run by individuals. Again, it’s about clarity and quality. Aha! I find one and dive into the site. I am hot on the trail! And there is the quarry, sitting pretty in a distractingly absorbing blog post. Do I simply seize the prey, make off with it and cast it into my own cooking pot? 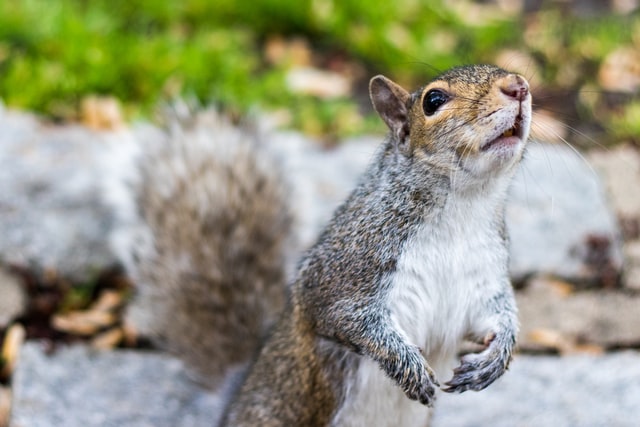 If an image is on a person’s website or posted on their social media platform like Facebook, then it belongs to someone. And there are laws about taking other people’s things. It is not only the legal thing and the polite thing, but the fun thing, to ask, ‘Please may I?’ I say ‘the fun thing’ because it can lead to delightful interactions and the discovery of new people with fascinating talents. So I wrote four, what are called, image permissions requests in emails.

Done with images for now. Quick and easy, yes? I got up at 6.30 and, by 9 am, had 8 of the images downloaded and the four requests sent out.

For you, in my view, it is not enough to serve up a generic style quiz. I want to give each one a custom-made look with a background image that will be enjoyable to engage with as you begin and progress through the quiz to the results. That can take quite a while too, but I know it will be worth it. Meanwhile, for the image permissions … I wait.

The first reply regarding my request to use a fine photo of spotted dick comes from Neil Buttery, chef, author, blogger and squire of the fascinating site Britishfoodhistory.com (Well worth a visit). Neil kindly grants permission and thanks me for asking. I have a warm glow. It’s nice to ask, isn’t it? This also allows me to ask Neil if he’d do a bake and a piece on marmalade roll as there is confusion about its exact nature. We enter into correspondence about the intricate subject of this literary pudding: no less than the one contrived by Mrs Beaver in the children’s classic The Lion, The Witch and The Wardrobe.

That leaves just one more missing image. The elusive and aforementioned marmalade roll …

Why is an image of this luscious pudding so hard to find? It’s because it can be confused with a Swiss roll. What’s the 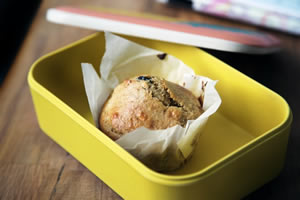 difference? A Swiss roll is a layer of sponge on which jam or some other filling can be spread and then curled up. A marmalade roll, however, contains suet, which is hard white fat usually from cows. (But you can also use vegetable suet.) If you are a meat eater and think how revolting this sounds, I have to agree with you. It does sound off-pudding, but the experience is rich and sumptuous. Like the marbling in steak. If you’d like to try the recipe, there is one here: Sticky Marmalade Roll.

I’ve never seen a proper one commercially produced. So, where was I to find an image for your quiz that looks like the real thing? But come, we are readers. Where do we seek information on anything? And that is where I found it: amongst the books, in the Librarian’s Lunchbox. Here Lydia posts both book reviews and literary recipes: a beautiful site and another that is well worth a visit.

Having written to request permission to use the photo of Lydia’s marmalade roll, I received a charming reply. This recipe is sponge but is inspired by the suet version and, from above, does give the impression of Mrs Beaver’s creation.

The following image stage is editing each photo for colour balance, clarity, framing and size. Put it all together, and it’s time to try it out. I am the first beta tester, and I usually find something that needs correcting. From me, it goes to friend and beta reader David out in Montana to put it through its paces. All good? Time for the unveiling, and it’s over to you.

So, that’s how I do my quizzing, extending the opportunity for you to indulge in some cozy play. If you’d like to create a quiz and would like some advice, do feel free to drop me a line, and I’ll do my best to help.

Meanwhile, there are now five quizzes up on the site, with more to come. Here they are in case one takes your fancy.

I hope that you are enjoying the holidays. After I’ve scheduled this to appear later today, I’m returning to editing the next book, Book 7 in the Amanda Cadabra series. And then I’m having some Christmas pudding! Back next time with the story of how, this autumn, I met, and fell in love with, Amanda’s apple.

Wishing you a fun, relaxing, literary, and above all, happy week ahead.