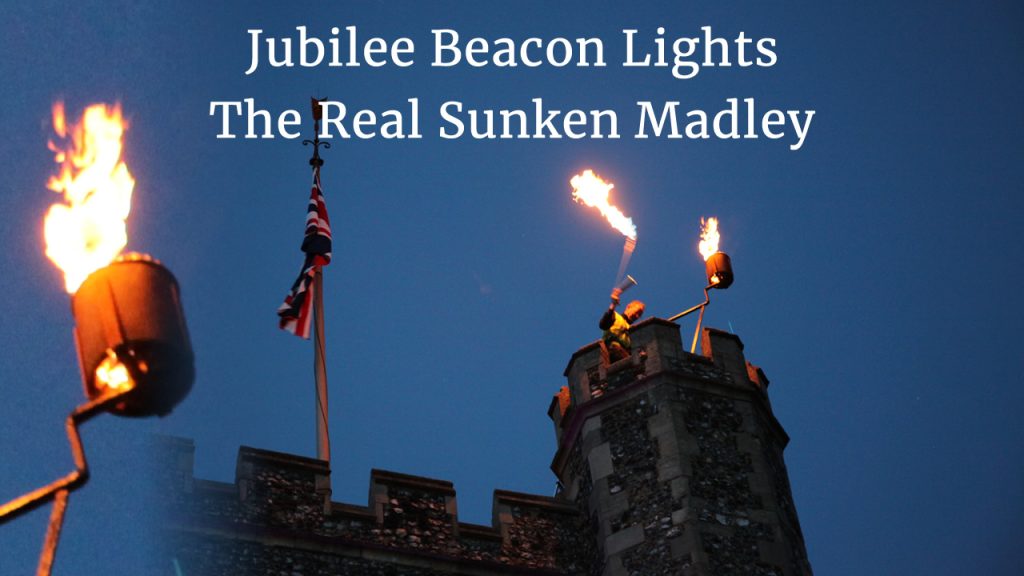 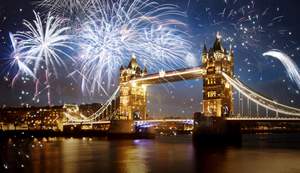 Queen Elizabeth II’s reign. Something of both a marathon and a record – the longest in our history. The occasion is called the Platinum Jubilee and it’s the first. The question is, is there any connection between the royal family and the Queen in particular in the Amanda Cadabra series. The answer is yes.

In the very first book, Amanda Cadabra and The Hidey-Hole Truth, when Senara Cadabra is putting Inspector Trelawney in his place, during his questioning of her regarding the strange demise of her entire family:

‘Did you notice the vehicle?’
‘I did. It obscured the view of our Princess Margaret roses,’ said Mrs Cadabra indignantly. 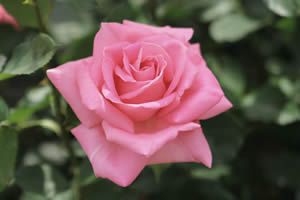 ‘And what did it —?’
‘Horse manure.’
‘I beg your pardon?’ asked Trelawney, startled.
‘Oh, I mean no disrespect to the dear Princess herself,’ Mrs Cadabra assured him. ‘No, indeed. Just that it’s the best thing for roses. But only after three years of composting. Not when fresh. I’m sure Her Royal Highness would echo my every word.’ Having successfully diverted the subject to horticulture, she placed one still delicate hand over the other, signifying that she considered the discussion of the transport to be closed.

But that, of course, is a reference to the late sister of the Queen, Princess Margaret. What about Elizabeth herself? Yes, again.

Amanda and The Queen

In Book 5, Amanda Cadabra and The Hidden Depths, a new character is introduced. The centenarian Mr Frumbling, a retired piano tuner and restorer, comes to Amanda’s aid to get The Grange instrument into working order in time for the St Valentine’s Day ball. He endears himself to Amanda, particularly in this exchange:

‘Mr Frumbling, may I ask you something?’ 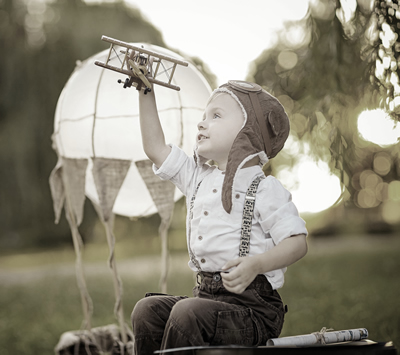 ‘Of course, duck.’
‘Is it true that you carry the telegram the Queen sent you on your 100th birthday around with you?’
‘Well, the palace doesn’t send out actual telegrams any more. Instead, you get a very special card. And yes, I have it right here,’ he said, putting a hand into his pocket. ‘Now, it’s not the original. I have that framed on my wall. This is a copy, but a good one.’
He took out a wallet from his inside breast pocket and opened it for Amanda.
‘There … see that? That’s the Princess Elizabeth’s signature.’
‘My word!’ exclaimed Amanda in admiration.
‘Of course, she’s queen now,’ Mr Frumbling added, ‘but it’s how I always think of her. I was eight years old when she was born. Not a princess then. That came later. Can you imagine me at eight, looking at me now? White hair and a lot of wrinkles!’
He gave her a roguish twinkle, and suddenly Amanda saw him. There he was before her: a boy with a lot of untidy thick brown hair, a missing tooth, grey shorts and lace-up boots. She grinned. ‘Yes! Yes, I can, Mr Frumbling. It’s my belief that you haven’t changed a bit.’

So what is afoot at Monkey Hadley, the real Sunken Madley? Well, on Thursday night, I attended a gala at St Mary-the-Virgin, parish church of Monken Hadley. 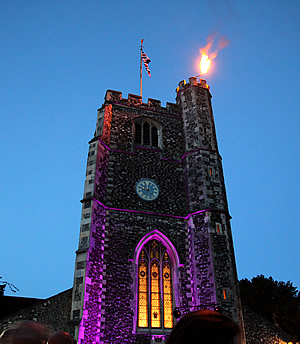 An operatic performance delighted us until dark when it was time … to light the beacon. The fire was lit first by the local borough deputy mayor, who, having been born in Sri Lanka, was also representing the Commonwealth. Soon it was hoisted by cable up to the tower (saving the long climb up there), and the beacon was kindled to cheers from below where I was photographing and  filming. Finally, we sang what we refer to affectionately as ‘The Queen’, a song wishing her well which is used for the National Anthem.

In celebration of this extraordinary day, beacons were lit all across the kingdom and the Commonwealth, from Tonga and Samoa in the South Pacific, to the final one in Belize, in Central America. Historically, the church has been part of the tradition of beacon-lighting. The tower overlooks the land below, dipping into the London basin. It is topped, admittedly, by Chipping Barnet church which is the highest point in London, reaching 427 feet above sea level (next stop at that elevation is the Urals), but there was no beacon up there, probably for safety reasons. However, St Mary-the-Virgin is a worthy representative. 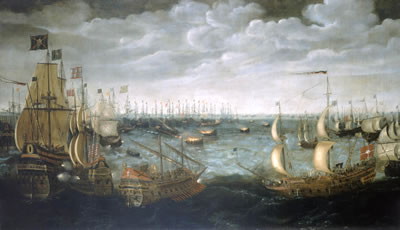 approach of the Spanish Armada back in 1588. The tale goes that the approaching ships were spotted off the south coast of mainland Britain and the chain of fire was the quickest way of getting the news to London and elsewhere. Vice-admiral Sir Francis Drake, handily located in Plymouth, reputedly finished his game of bowls before he set off, raised sail and led the fleet to a climate induced victory as, typically, the weather was appalling, but both sides, no doubt did their best. The Brits tried a follow up counter-Armada the following year without the meteorological advantage. It did not go well.

The outcome to one side, and we’re good friends now anyway, the point is that at the time of the Armada, we lit lots of fires on high places across the land, and the idea is all rather thrilling. So we did it again. Only this time, I was there, and I can tell you that it set my spine a-tingle and my heart a-glow as the flame gathered strength and reached into the night sky, carrying the chain of light across this green and pleasant land.

What It Means Now 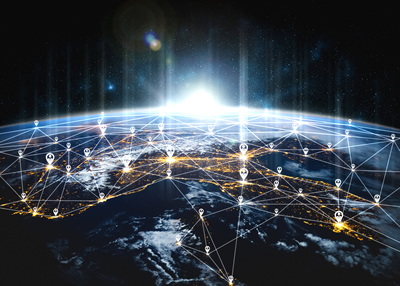 It’s a tradition for beacons to be lit at coronations and weddings, and other joyful events of that nature. What was once used as a warning system is now a symbol of togetherness. But this is a first. Yes, the first time that so many beacons, perhaps over 3,000, were lit across five continents, and not just in Commonwealth countries but even in the USA.

I have to admit that this makes me very emotional. Why is that then? Because the truth of the matter is that the British Empire did not by any means have the best track record, and Elizabeth saw out its last days, and although I am only half English, I am still somewhat conscious of this uncomfortable fact. Nevertheless, people throughout the world are large-heartedly setting aside this historical baggage in favour of remembering and appreciating the best of a lady who has been our ambassador and representative from long before I was born.

Also, because I have yet to meet the vast majority of you, and somehow the beacons gave me a link to you, if only in my imagination. And that’s enough.

For example, it connected me with Cornwall, as the beacon was lit in Camborne, home to my dear Cornish language mentor, Kensa, and my treasured friend and study partner dwells nearby. When I stood below the tower of Monken Hadley Church, I was linked to many lovely people in Cornwall whom I met through the books. All I can say is, that I did my best not to fog up my camera lens!

Tea on the Lawn 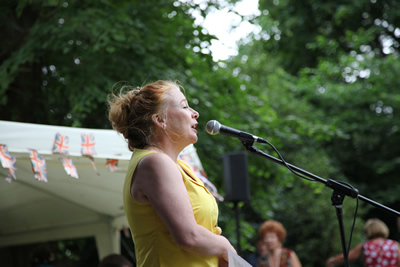 Today, we’re expecting the rain to clear for the Jubilee garden party on the church hall lawn. There will be bunting, there will be vintage songs, there will be a tombola stand, there will be Pimms. For a couple of hours, like Amanda (although without the danger! Or the cat), I will step back in time to the very best of a by-gone age. I promise to do my best to bring you photographs. I include here a pic from the church fayre three years ago of the fabulous singer Angela Henckel who sang for us on that occasion, and at the jubilee, dazzled, delighted and brought us to our feet in a standing ovation.

I will have to find a reason to have Sunken Madley’s St Ursula- without-Barnet’s beacon lit in a future book. Hm …

In case you’re wondering about this Commonwealth thing, it’s an international sort of club mostly made up of 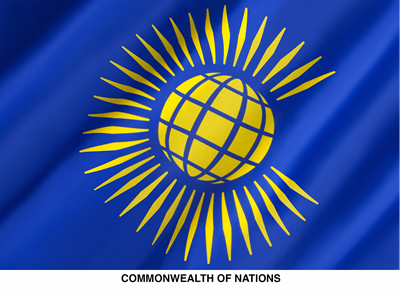 countries that used to be part of the British Empire. During the last century, it was decided country by country that it made no sense to be told what to do by people on the other side of the world and more sense to have independent government.

However, many people from the UK over the centuries made their home in these countries, and many from there came and settled here, so there were strong ties of culture and heritage. Furthermore, there were good things about being part of the empire, so they kept those and made an organisation where all countries are equal and together pursue peace, prosperity and democracy. This is generally regarded as A Good Thing. The sun never sets on the Commonwealth. Somewhere a beacon burns for those three principles.

And if you’re curious about where the word jubilee comes from, it’s the Hebrew word yōbhēl. This referred to a kind of trumpet blown on special occasions, especially every fiftieth year. This jubilee signified an economic reset. Slaves were freed, debts cancelled, and if you’d had to sell your land to make ends meet, you got it back. A cause for … jubilation. And today’s personal cause for that emotion: I’m now up to 12,000 words on the new book.

There is another reason why a gala concert was held at Monken Hadley church, but I’m going to save that for another day. That’s because it’s connected to one of the books which is going to get a makeover in the next few weeks.

That’s all for now. Wherever you are inside or outside the UK and the Commonwealth, may I wish you a happy, peaceful weekend with just the right amount of excitement. Thank you for all the times that you are with me in spirit.

May you find something to celebrate every day.