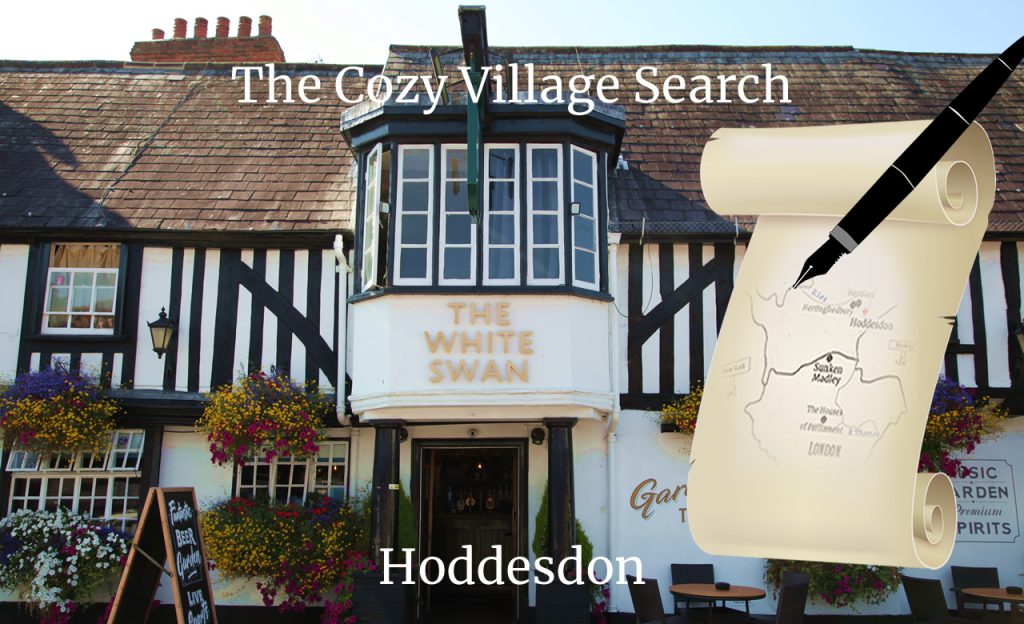 Hoddesdon is a small but beautiful town in Hertfordshire, the county north of London. It is from here that the Amanda 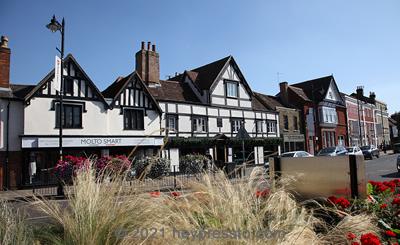 Cadabra series draws much of its rural spirit, as well as architectural inspiration.

And so, it was inevitable that it should be a field-trip destination for photographs (larger and more on the Inspiration page) for you of cottages, pubs and churches from, ideally, the 16th century when Sunken Madley, Amanda’s village, was up and running.

Before my visit a few weeks earlier, about which I wrote to you last time, to the village of Hertingfordbury, I had never heard of Hoddesdon. However, it had been revealed to me, while on hallowed ground, that there I should find the riches I sought. 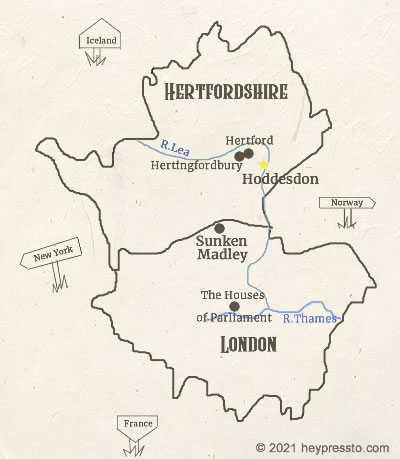 To help you get your bearings, the map from the previous letter to you has had a new feature added: the river Lea. This is where I get my water, incidentally. Not that I visit each day in person.

The Lea flows down from the Chiltern Hills to the north, in the county of Bedfordshire, makes its way through Hertfordshire, west through the county of Essex, and finally into London to join the mighty Father Thames. More about the Lea another time. The point is that Hoddesdon is in the Lea Valley. (Please note that this map is an approximation of locations. Best not to base an expedition to deepest Hertfordshire on it.)

Having arrived at the south end of the little town, the first building outside which parked was one I was searching for: Rawdon House, first built in 1622 by the splendidly named Sir Marmaduke Rawdon. This fine edifice could easily have been the inspiration for The Grange, arguably the grandest house in Sunken Madley. 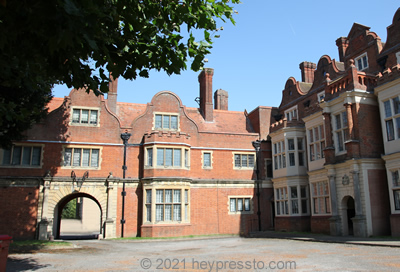 The Grange is home to the village’s oldest and most venerable resident, Miss Cynthia de Havillande , her bosom companion, Miss Gwendolen Armstrong-Witworth, and their friend, estate manager and self-styled ‘butler’ Moffat. Not only that, but it is also the residence of the unattainable Natasha, object of desire of Tempest, Amanda’s perennially grumpy feline familiar.

Rawdon House appears now to be occupied by offices, and I was kindly granted permission to photograph and film from the courtyard, as you can see. Incidentally, Sir Marmaduke also built a house for his son, called, coincidentally … wait for it … The Grange, which I hope to find one day in the future. It came to be used as a school.

But that was only the beginning of what Hoddesdon was to offer me. 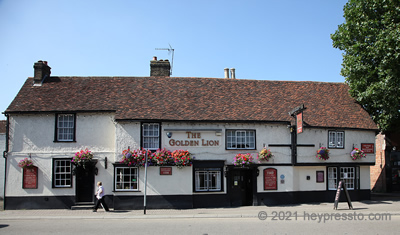 a public house — tavern or inn of old. It was built in the 16th century, just the way we like them, or possibly earlier. This hostelry is very much the flavour of Sunken Madley’s The Sinner’s Rue that dates from the same time.

It was here, at The Golden Lion, that I lunched, regaled by a resident of the pub itself with fascinating tales, including one of a member of staff who was required to stay there one Saturday night for the sake of the security of the inn during the hours of darkness. Alone. Unable to bear the ghostliness of the atmosphere, she was unable to last the night and fled. Her room was now occupied by my kindly narrator, who declared that he had never detected the least hint of spookiness anywhere in the building. 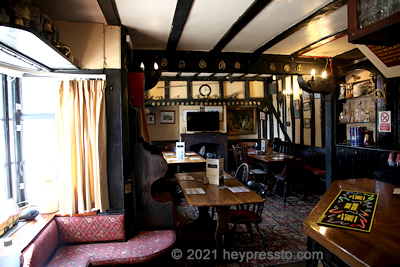 Charming as the exterior of the building was, within it was even more so. The old beams of the original timber frame were everywhere to be seen. It was here I lunched, chatting to the splendid barkeep and the pub’s fascinating principal tenant. It could not have been a happier hour, in such beguiling surroundings with the best of company. This was the true Brit pub experience.

However, there was more to see and to capture on (digital) film for you, and so, at last, I re-emerged into the September sunshine and made my way north up the High Street. There I found more glorious sights. Here you can see how the juxtaposition of architectural styles as the village grew into a little town, and in the foreground, that testimony to the British Royal Mail: the red post box.

Next was The White Swan, another 16th-century inn and remarkable for having kept the same name for 400 years. Inside, the old beams and cosy inglenook fireplace are still in evidence, and there was the expected welcome at the bar.

My final port of call, having ended my soft-drink pub crawl, was the 15th-century church of St Augustine’s Church, 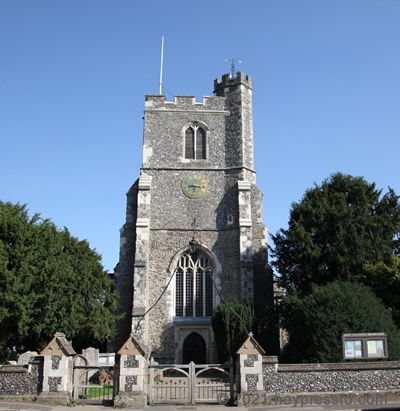 Broxbourne, whose borough encompasses Hoddesdon. This church has the distinction of a mention in the Domesday book of 1086, but the one still standing was built 400 years later. A mere stripling by comparison. In common with many Hertfordshire churches, it was built with mainly flint-faced rubble walls with stone (Ashlar) dressing. Flint, because Hertfordshire has a lot of it. The tower’s eight bells are rung for weddings and to call the faithful on Sundays.

Again, this church echoes Sunken Madley’s own St-Ursula-without-Barnet, which is also a medieval church, though with a more modestly sized graveyard and probably fewer bells. (To be decided. Suggestions welcomed.)

What I was unprepared for was the beauty of St Augustine’s location. It stands by the New River, a tributary of the River Lea, sparkling in the sunlight, a-quack with ducks. I say ‘New River’; it was new in 1613 when it was thoughtfully created to supply the locals with drinking water. The schools were finishing for the day, and a group of eager children were clustered around the ice-cream van (one of which also gets a mention in the Amanda Cadabra series). 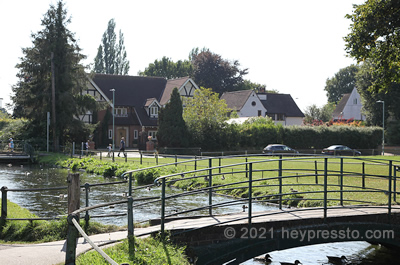 I stood on the little bridge over the water, knowing that, wherever I pointed my camera, I would capture something beautiful, whether it was the feathered friends below, the church tower above or the tree-lined path leading away through the park, which could easily be a village green.

And so, with the sun westering and the rush hour gathering, it was time to leave this idyllic setting and head for home. However, I had another field trip planned, for the very next day. But that is a story for the forthcoming letter to you, dear readers.

I hope you have enjoyed this romp through a small historic county town and that it has supplemented your vision of the village of Sunken Madley … just ‘three miles south of the Hertfordshire border and 13 miles north of the Houses of Parliament.