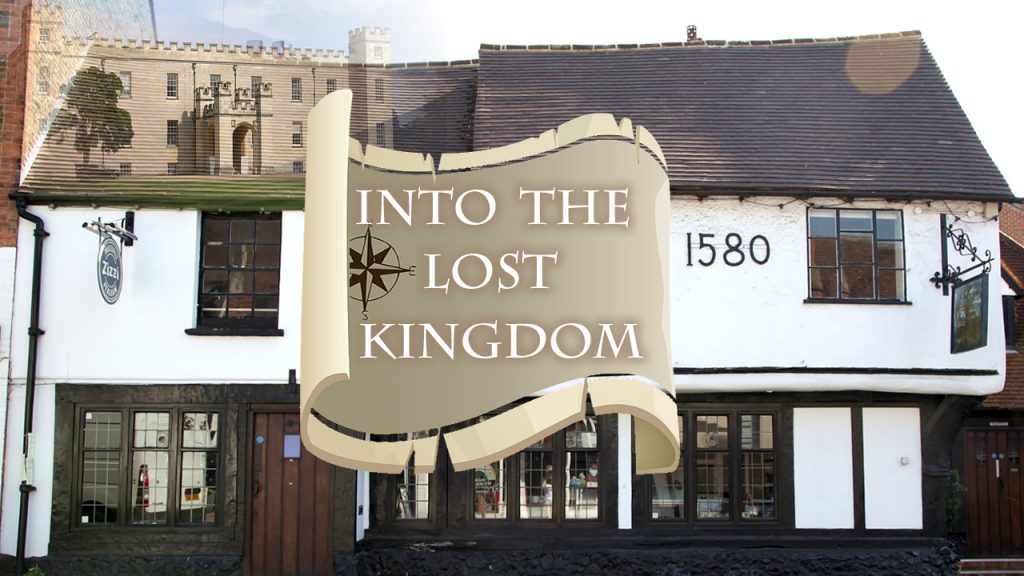 Into The Lost Kingdom – In Search of the Cozy Village

Once Upon a Time … 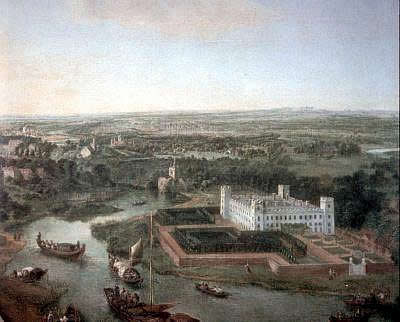 A thousand years ago, a kingdom was formed. The name of this kingdom was derived from the West Saxons, to distinguish themselves from the Saxon kingdoms in other directions around them. Its name was Middlesex. It existed for a thousand until, in 1965, it was absorbed into London.

The place where I grew up was once in Middlesex, and also, for a time, was Amanda Cadabra’s village of Sunken Madley. And so it came about, that inspiration for this large hamlet was, by chance, brought to my attention there, one sunny weekend in September. It wasn’t even what I’d been looking for.

Which brings me to apples.

The Fruits of Sunken Madley 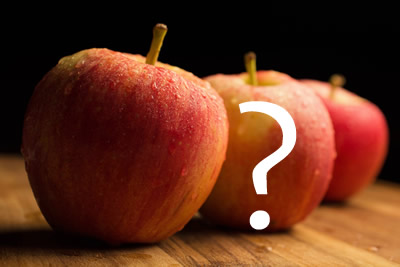 When our cozy village was forming in my imagination, I knew that it had rural connections. So, I went looking for what Hertfordshire, historically, has been famous for growing. Yes, you guessed it: apples. Sunken Madley suddenly became bordered by orchards, and you may recall that Amanda’s and her grandparents Senara and Perran’s house is number 26 Orchard Way. The orchard itself is next door and has some … rather unusual features that become apparent in Amanda Cadabra and The Cellar of Secrets.

But, what would be the variety of apples that would be growing in and around the village? It would have to be an old variety with a name evoking warmth and antiquity. Reading about apples, I made a shortlist, and the winner was … Hormead Pearmain. Into the first book it went, whilst I blithely assumed that, somewhere, there would be such an orchard that I could photograph and film for your delight.

The Challenge is On

The truth turned out to be somewhat different but much 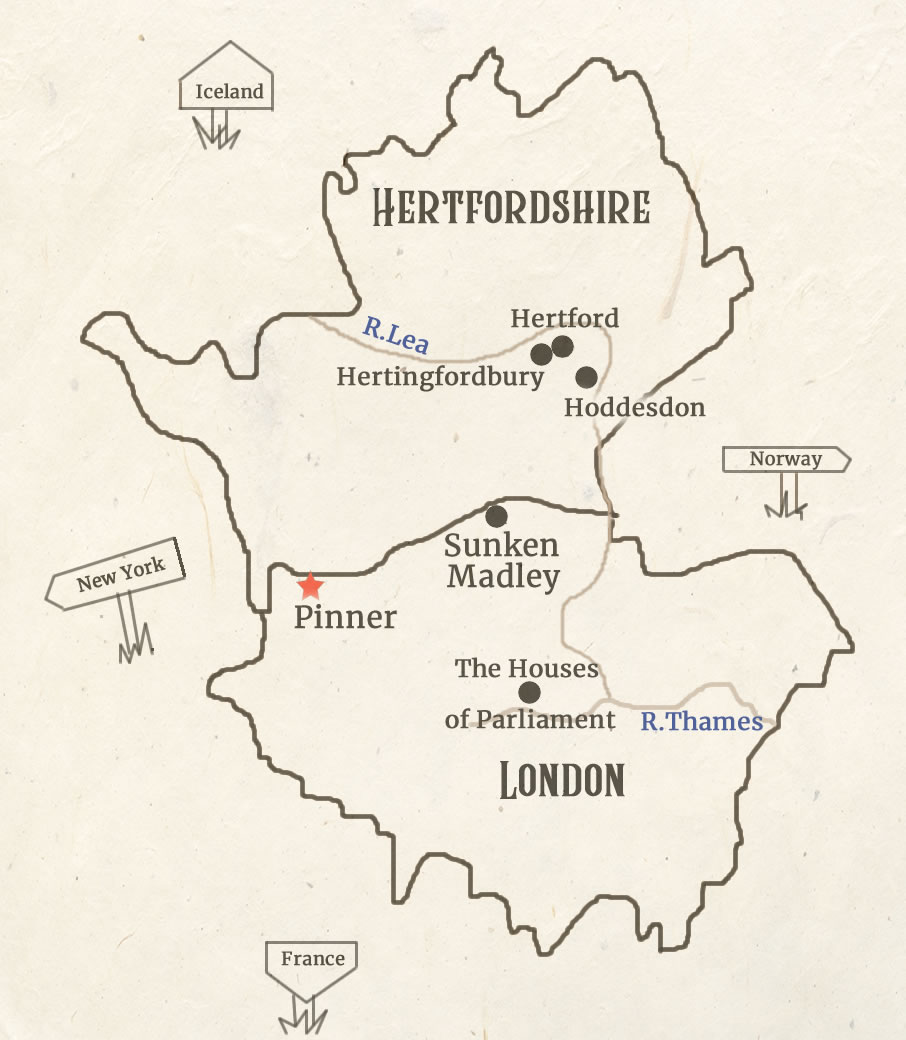 more interesting. I set about looking up orchards and, with my first phone call, spoke to Alison Rubens, an outstandingly helpful lady who is the founder of the Chorleywood Community Orchard in Hertfordshire. Mrs Rubes explained that Hormead Pearmain was, in fact, now a rarity. However, she kindly gave m a list of orchards with vintage varieties that I could contact to see if any of them had ‘my’ apple.

I worked down the list. ‘No,’ ‘Sorry, no’ and ‘have you tried …?’ ensued until I came to the last name in the list. A gentleman in what was once called Pinnora in the one-time county of Middlesex. While attempting to contact him, I looked up Pinner, as it is now called. Of course, as a north Londoner, I had driven past and through it and never taken much notice of it. And then ….

The internet presented me with an idyllic, chocolate-box photograph of a high street, sloping up to an old church. The thoroughfare appeared to consist almost entirely of 16th-century shops and an utterly charming pub. I gasped. This was El Dorado. Quickly I planned a route. 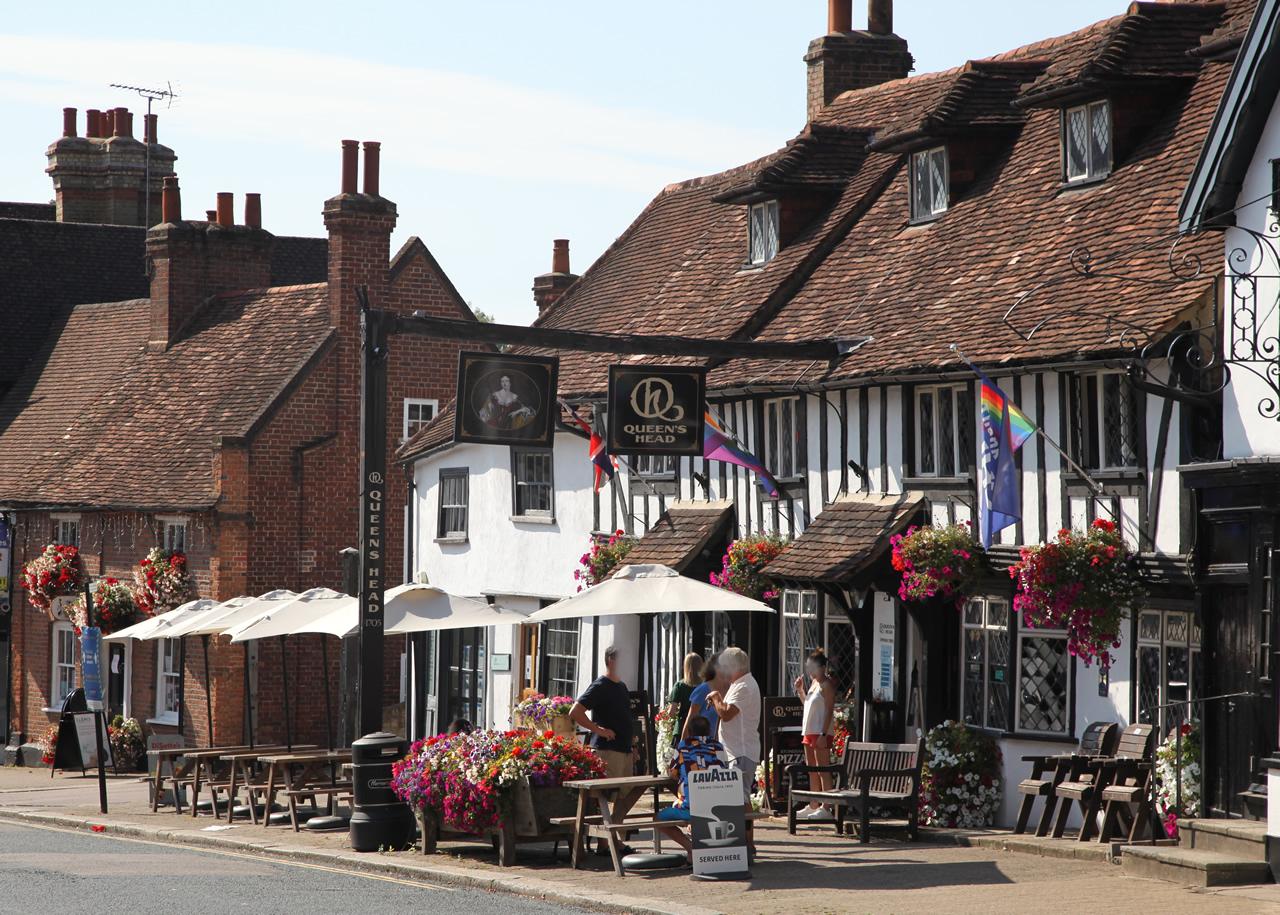 Then I made contact with Gerry Edwards of Pinner’s Gerry Edwards Orchard Services. Gerry assured me that he had a young Hormead Pearmain tree on his land. However, he was at present away from Pinner working in Dorset. Nevertheless, Gerry promised, on his return, to take some photographs and send them to me. He explained that there is a reason why these old varieties are no longer grown. In simplified terms: they’re no good. That is, not compared with newer types that are hardier and yield more fruit. They are now grown for interest and for the sake of preservation.

With thanks, I set off on my journey to Pinner, called Pinnora in 1231. I was now filled with a new purpose: not apples but further inspiration for Sunken Madley and photographs for you, dear readers.

On the way, I received a call from one of the contacts on the list. This was none other than the noted horticulturalist and naturalist, Michael Clark, warden of the Tewin Orchard in Hertfordshire. More of Mr Clark next time. I was delighted to hear that, yes, he had two trees and one had fruit. I was welcome to come along and take photographs.

By then, however, I was on my way to Pinner but promised to call back and make an appointment. As I say, more of that to come. 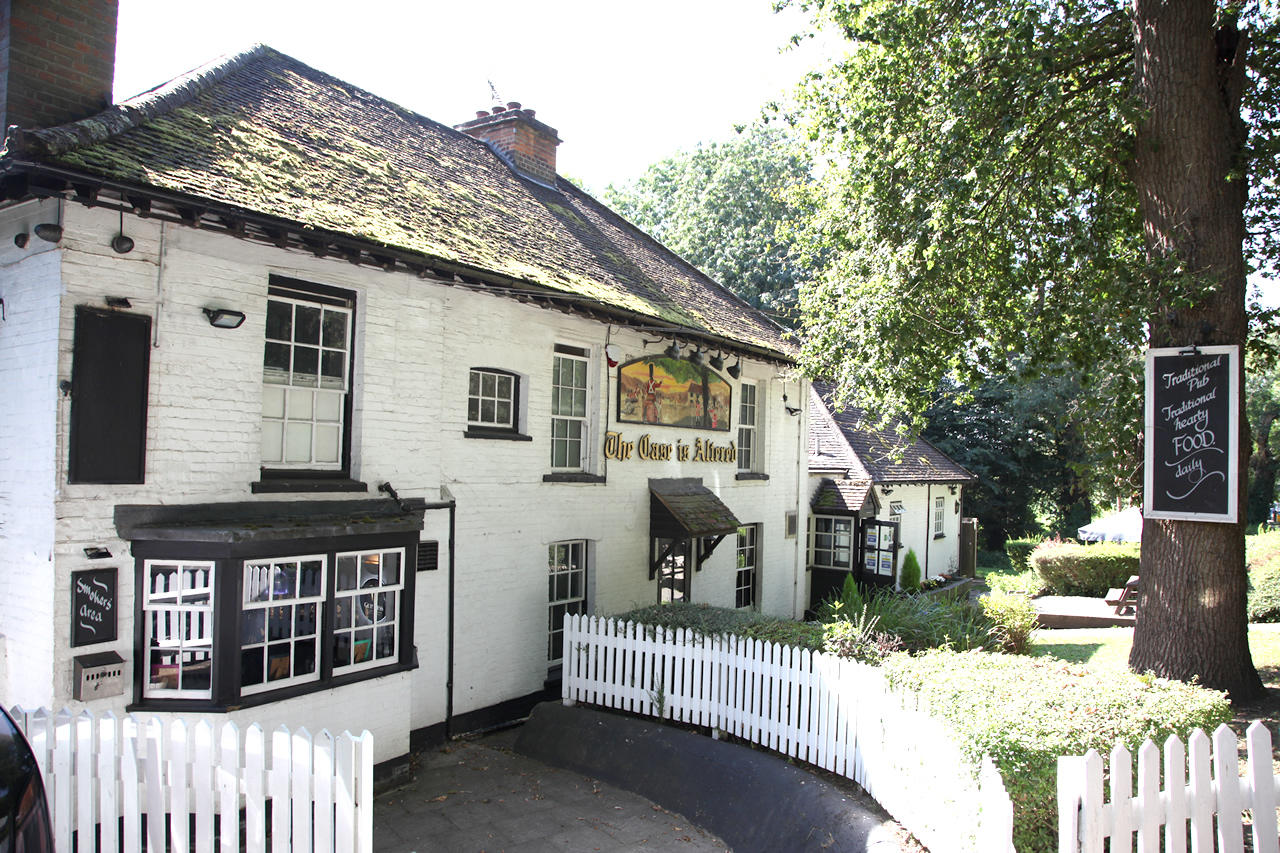 Which brings us to where I landed that day. Pinner is just two miles south of the Hertfordshire border, to which I drew closer for lunch. I had planned a visit to a restored 17th-century hostelry at the edge of Harrow Wield, on the ancient ridgetop road of Old Redding. The front looks over to trees, not apple trees but the woods of the common. The view from the back of the pub is truly spectacular, down over the valley of the River Pinn.

This inn goes by the unusual name of The Case is Altered. It derives from the time when the owner of the, then, cottages changed their use to a public house. I spent a delightful lunch hour. Mine host could not have been friendlier or more attentive, and on the deck in the garden looking over the magnificent vista, I must have had the best seat in the house. This spot is an excellent echo of a small place immersed, as is Sunken Madley, in the countryside even though it is, technically, within the borders of Greater London.

Nevertheless, my dream ‘village’ road beckoned, and so I set forth. And it was as wondrous as the photograph. A perfect chocolate-box high street lined with small shops, where Tudor rubs shoulders with Dickensian Victorian, stretches up to the ancient church at the top of the hill. The jewel in the crown was The 16th century Queen’s Head, bright in the sunshine, fronted by parasolled tables with happy snackers and sippers.

I was drawn as to the lodestone rock. ‘Welcome’ barely begins to describe my reception. Naturally, I asked for permission to take photographs of the establishment. It was granted, but the staff were interested in my reason for visiting. I explained, and soon I was chatting to the highly well-informed proprietor.

Sean White, FRSA (Fellowship of the Royal Society for the Encouragement of Arts, Manufactures and Commerce), is not only an award-winning publican but a sponsor of art, life and all that is fine. He cares deeply both for the welfare of his staff and for those who visit the Queen’s Head. Listening to Sean describe the history and present of the pub was a remarkable experience.

The Grade II listed building was originally residential, a Wealden hall house. These were built for the staff of a noble household. This one consisted of 4 bays, and in this case, one was the cottage next door. It also had a forge. Then it was repurposed into a coaching inn with stables and was originally called The Crown. A nice safe name that meant you were covered regardless of how the throne might change hands!

One curiosity dates from the 1930s when the wealthy and somewhat eccentric Mr Dawson Billows was the proprietor.  He briefly kept a bear in the stables and would take it for walks until, presumably, a more suitable home was found. If this photograph is anything to go by, the household did their best to care for Dawson’s animal guest.

Mr Billows made extensive refurbishments to, and had his name engraved on, the structure. You’d have to have a keen eye to find it, but Sean told me where to stand by the bar and look up. And above on a ceiling beam … there it was.

Past, Present and Future

Coming into the present and uniting with the past, Sean related that on New Year’s Day, when morris dancers make their rounds, they include at the Queen’s Head on their route, dancing inside and out. I must say, I am tempted to pay a visit on that particular day!

Sean kindly emailed me three documents detailing the history of the pub. And, in addition, he gave me a copy of the journal Proud of Pinner, which offers a wealth of information about the town, including historical anecdotes and photographs. Who knows what choice detail may find its way into the Amanda Cadabra series?

One of Sean’s tip-offs was that 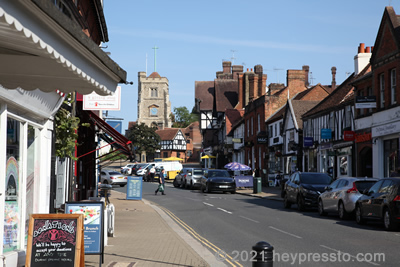 most of the Tudor-looking buildings were just that: ‘looking’ rather than actually dating from that period, and built much later. Sean pointed out which ones were genuine, and you can see the best of them here or on the Inspiration page.

The second vital piece of information with which Sean’s kindly furnished me was that the church was preparing a flower festival in honour of its 700th anniversary. This I had to see, and you will know about if you’ve seen the letter to readers here and the video about that extraordinary event that I came back to experience.

And so I made my progress up the high street towards my final stop: the church of St John the Baptist, where stunning floral preparations were in progress for the coming weekend’s celebrations.

If you’d like to see and read about that, you can find the letter and video here: 700 Years

There, for the moment, we leave Pinner. I have another reason to return in addition to the morris dancers. Sean informed that there is an excellent museum nearby that it would be well worth visiting.

Next stop: into smoke of a famous battle to find yet more inspirational treasures and research for the next two books in the Amanda Cadabra series.

Thank you for coming along on my journey with me. I hope you have enjoyed this expedition into the lost kingdom of Middlesex and the delights of Pinnora.

From next Sunday Book 1, Amanda Cadabra and The Hidey-Hole Truth will be available for free download from Amazon, from 12th to 15th December. I’ll remind you next week in case you’d like to check it out or pass on the good news to your friends.

PS If you’d love to start the series now: